You are here: Home / Fun / DVD Reviews: You Again 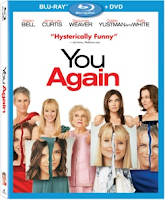 This seemed to be the perfect date night film. Until I had read the awful buzz on the film, then I got very, very scared. But I generally like touchstone romantic comedies. They are mainly formulaic but also quite fun. They have great gags for the guys and a witty girl power message. The wife to be was very excited about this film, she loved Kristen Bell in Couples Retreat, and is a gigantic fan of Betty White (I have to say I was pretty excited to see her too).

So Valentines Day came early for us I cooked up some breakfast for dinner and popped this sucker in the PS3. I was ready for a cute yet lowest common denominator romantic comedy.

Once upon a time, Marni (Bell) was an outcast among high school outcasts. Eight years latter she is a poised and prosperous PR executive rapidly building a name for her (to do this she just ditched the glasses and got proactive). But, that all deviates when she returns home for her brother’s wedding because he is marrying her high school nemesis Joanna (Yustman,). Meanwhile, Marni’s mother Gail (Curtis) finds herself in a similar situation with Joanna’s aunt (Weaver). Hilarity (well sometimes) a feeble approximation of hilarity ensues.

Things you should now realize about the synopsis, I left out Betty White. She was, for the most part, left out the film. I think that I can only recall three scenes that she was in. The scenes that she was in she was used for horny elderly jokes, which was my favorite part of the film. In the dogma of comedy they really should have a
chapter about elderly people saying dirty things. Betty White steals every scene that she is in. Unfortunately this was off set by Weaver’s performance. She really does not have a funny bone in her body. Or maybe I just only see her as Ripley from the Alien. All of her jokes were said so crassly that I was embarrassed. Curtis and Bell really turn up the charm. Without them film would have really fell flat on its face. They bring all the heart they can muster up to this poorly written film.

The major problem I had with this film was the script. First-time feature film screenwriter Moe Jelline’s writing is a muddle; an immature, excessively manufactured tad of decrepit genre crap that proposes little, completes nothing and goes nowhere fast. Jelline’s characters are irksome, harsh, self-absorbed bitches that I’d rather see killed by and ax murder in a horror film (Cutis should have brought back her training from the Halloween series). Thankfully such skilled actors such as Bell and Cutis can navigate through this mess and etch out some really interesting thoughtful character moments.

• Deleted Scenes: Some good hit or miss jokes here, but too many some just should have stayed on the cutting room floor. But if these scenes were put back in the move the extra half an hour would have been unbareable.

• Following Flickman: On Set With the Director: I don’t undersand and I will not try to either.

• Blooper Dance Party: Is it me or does every romantic comedy that ends in marriage end with a dance sequence during the credits. These are the bloopers.

This film is great fare for your upcoming Valentines date night. The film was mindless and forgettable but never a painful time. The movie really should have pulled it’s ace more and utilized Betty White’s comedic power because here timing was far and away better than everyone else. If I were not watching this film with the wife to be I would really have enjoyed it much less (buy much less I mean hated it).