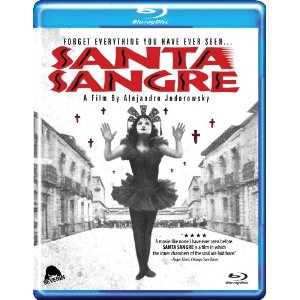 There was a time when this would have been one of my favorite movies. The year would have been 2004. Back then, I was heavily into Luis Bunuel. This was one of the few post-Bunuel movies that embodied the essential creepiness and odd humor of the Surrealists (the other one that comes to mind is “Videodrome”). There’s the obvious Freudian stuff, the obvious shock stuff, but leaving all that aside, there are indelible moments of cinematic poetry. The elephant; the son’s arms; the final shot. It feels like a repressed dream/nightmare. And the Red Sox won the World Series. Think “Un Chien Andalou” but much easier to watch. So it looks like the wife to be was not up for this one. And before I go any longer lets get what I can make of a synopsis!


“Santa Sangre” is the story of Fenix, a man in a mental institution at the films beginning. A flashback shows Fenix as a child, growing up in the circus. His mother, Concha is a trapeze artist and religious fanatic who worships an armless god. His father Olgo is a knife thrower, who is constantly having flirtatious encounters with the ugly, cruel tattooed women. Fenix’s closest friends are a mute mime, a dwarf and of course clowns. After a circus performance, Fenix’s mother catches Olgo having an affair with the tattooed lady. In a fit of jealous rage, she dumps acid on their genital regions. Then Olgo cuts off Concha’s arms like the goddess, and then cuts his own throat. Poor Fenix witnesses the death of his father, and the Tattooed women drives away with his mute friend Alma. Years later Fenix is reunited with his armless mother, she’s out for revenge. In order for her to throw knives, he has to stand behind her and put his arms through her sleeves (she mentally controls his arms).

This is a difficult film to review because of its classification in surrealism. Santa Sangre is many things a comedy, a drama, a horror movie—complete with spurting, Crayola-red blood—and a winding tale of insanity and restoration. At many times, the viewer will be disgusted, overjoyed, entertained, or sympathetic. Clearly, this isn’t for all palates, but if yours run toward the obscure and strange, Santa Sangre will likely satisfy. Mostly Santa Sangre is a revision of Freudian analysis of the self. The father is the id the mother is the super ego and the son is the ego. The two spend the entire film wrestling in side of Fenix. The colors in this film are absolutely wonderful and need to be seen on blu-ray.


* Audio Commentary: Jodorowsky recently recorded this
* Forget Everything You’ve Seen: The World of Santa Sangre :A must-watch. This explained so much to me.
* For One Week Only: Alejandro Jodorowsky: Jonathan Ross recaps and overviews the career of Jodorowsky
* Goyo Cardenas Spree Killer: the real-life serial killer who inspired the film.
* Blink Jodorowsky Short by Simon Boswell: Two minutes of Jodorowsky blinking very slowly. No, really.
* Echeck – Adan Jodorowsky Short Film: A silent black and white short by Jodorowsky’s son, that is really great.
* Deleted Scenes: A few short deleted scenes, with commentary.
* Theatrical Trailers
* Interview: There are more interviews than I care to remember.

This is the sequel to Psycho that never was (well from a psychological standpoint). It’s really tough because I think that this film defies a grade because it would be counterproductive. Honestly, if you love the films of David Lynch and Terence Malick watch this film.

It is a shame that Alejandro Jodorowsky continues to be one of the most talented, but underrated directors of all time. His earlier works did lay to foundation for midnight movies, and cult acid cinema. Santa Sangre does have the potential to being a really good art film, and should be appreciated in that respect. A must have for lovers of weird films.

We received a copy of this title for our book review. All opinions are our own.
4 out of 5 torn apart elephant carcasses.

« And the Winners Are…..
Clothing Reviews: Tea Collection »