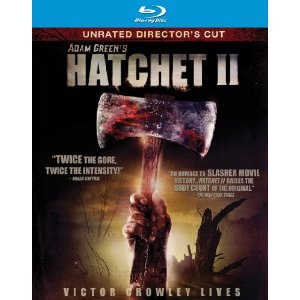 After watching the film my buddy turns to me and says “well, at least the review will be entertaining.” So, I watched this film under different circumstances. I usually have a methodology to movies that I review, that can take either two routes:

1. There are movies that I watch with the wife to be, so I can understand the female perspective on them. This usually is for comedies or romance films.

2. There are movies that I watch alone for analysis, or she deems unworthy of her time.

So this was new to me. We will call him Capt. K from now on. Capt. K and I went to college together and both are film freaks. That’s all the necessary backstory. I called him up because he, like I was a gigantic fan of the first Hatchet film. It was a very fun throwback to 80’s slasher flicks. So before the film he told me a little about the backstory of this movie. According to him, this film was banned from theaters because of its graphic nature. Therefore, we were really excited for this one.

I hacked em’ up and all I got was this crappy synopsis:

We start again here, in Honey Island Swamp—the “last girl” escapes mutated slashed monster Victor Crowley (Kane Hodder) and scoots it to Bourbon Street, where Reverend Zombie (Candyman’s Tony Todd), a “voodoo” (basically sells fake potions and crap) specialist proceeds to chatterbox us with the particulars of Crowley’s ignoble origin (which were explained in the last movie). The details do not make sense but, now, his soul stalks the swamp, butchering all who come near with an assortment of trappings.

How does a ghost corpse get gas for his chainsaw?

Anyway, Marybeth wants to go back into the bayou to recover her dead father and brother’s bodies—and get revenge. Clichés ensue. We have all the great horror cliché here, which is why I don’t understand why this film was banned from theaters. These are all things that we have seen before. The kills are cheesy (which make them that much more fun) while they only happen in the first five minutes and in the last fifteen (which makes this film less fun).

There is nothing really to be afraid of here in this film. It is a super generic horror (almost passing as a parody). There are two glaring errors with this film. The first is the area between the end (the last ten minutes) and the beginning (first five minutes).

There really is nothing here to really enjoy, it bored the crap out of me and did not even try for the odd scare or kill. Secondly (and this is very small compared to my first complaint), the lead actress was doing
something with her right eyebrow the entire film, it almost seemed stuck to here hair line, that kind of looked weird, and we could not help but notice it in every scene.

Two commentaries: for fans only but also may be good for those who want to get into making low budget horror films.

Behind the Screams: Really well done behind the sceenes.

EPK: Seems just like a lite version of Behind the Screams.

The Killing Machine: Cool look at the kills and how they were created.

Overall: There were some really fantastic things for genre enthusiasts (some great inventive kills and some really funny moments and some great dialogue). For me there was not as much to like the middle of the
film really did not move very well which kind of ruined the rest of the movie for me. There was really a promising beginning and end.

If you know who Kane Hodder is go see this movie now.

is available for purchase wherever DVD’s are sold.

Overall: 2 ten-foot long chainsaws out of 5