You are here: Home / Fun / DVD Reviews: For Colored Girls 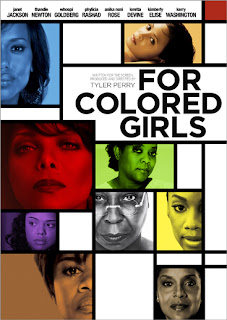 Adapted from screenplay by Ntozake Shange from her book of poetry and choreopoem, “For Colored Girls Who Have Considered Suicide/When the Rainbow is Enuf”

Like “Precious”, For Colored Girls emanates as a movie for Black women. However, both Precious and For Colored Girls speak in palettes that transcend any color or ethnicity. It shouts, it demands, it screeches, it rages, it cries in anguished grief and tattered joy to all women.

A continuance of the choreopoem performed first in coffee houses, then in play form, then on Broadway and based on Ntozake Shange’s award winning book of 20 poems, Shange’s poems speak through these eight women. The women – women of color – connect themselves as they enter each other’s orbit through tragedy. Some live in the same condo-walk up in NYC; one is a social worker attending to the safety of one of the mothers who lives in the condo. One is mother to one of the tenants named Yashima and her talented sister Nyla. And one is the dance teacher who lingers in peripheral vision. One is the boss to the woman whose children are at risk. One is a nurse who petitions the boss (Joanne Bradmore played by Janet Jackson in a magnificent performance) for a donation to help her clinic for at risk Black women. There are other cast members that create performances that chill: the alcoholic abortionist is one.

The circular movement of fate intertwines their lives. Janet Jackson, Thandie Newton, Whoopi Goldberg, Phylicia Rashad, Anika Noni Rose, Loretta Divine, Kimberly Elise and Kerry Washington represent most of the all star cast and the story revolves around them.


These women thrust themselves into a universal conflict – they experience incest, rape, sodomy, abandonment, betrayal and abortion and violence through their Black male counterpoints. What they discover at the end of the movie is that they must fill their own void – they must not give away their treasures to men who use and abuse them. 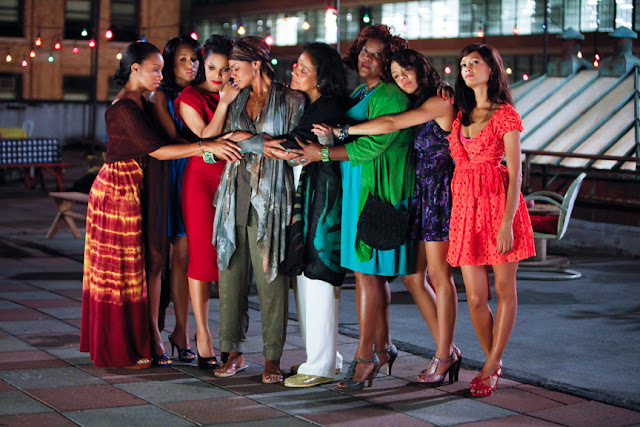 Simple to say. What woman today of any color or ethnicity cannot hold this movie in her hand and deny their experience? These women of color, while they represent all women, have only each other in a society that despises them, that despises women, that despises men, that despises itself. However, the ones of us on the upper rungs of Dante’s Inferno have resources. These women have only themselves, each other, and a magnificence of spirit that contains their magnificent spirit, their perseverance, their intelligence and compassion. How to survive – and then transcend? Listen. The movie will tell you.


The juxtaposition of brutality underneath the poignant beauty of Shange’s poetry stuns and rips. The movie, masterfully presented by Tyler Perry, demands that we sit up and listen. It demands that we hear these women break their silence. It demands our presence and participation. And the talented and brilliant cast perform so honestly that we stay in the palm of their calloused hands.

WORDS do not and cannot describe the eloquence of this movie. If you are a woman, you must experience it. If you are a man, you must experience it. It swallows you up in a world that remains simply a step away, a woman away, a man away, a culture away. It grasps our humanity, steps on it, batters it, then throws it out away from the gutter into – the rainbow. I stand and applaud this movie and all of its components, for it is a work of art. Mona Lisa, stand down. You are second best now.

Generally, the special features are as resplendent as the movie itself and are almost as long. Do not miss these features that create the arena for the adaptation of one woman’s vision.


Span of the Rainbow – tracks the creation of For Colored Girls from the origin to the 2010 theatrical film release by Tyler Perry. We listen as Ntozake Shange speaks of the origins of the play beginning with her poems and the way that she presented them in a choreographed format. Tyler speaks about the 14 poems he chose for the movie.

Prism of Poems: Poems from the book and from the movie.

Trasformation: Movie Magic shows trailers from the movie and about the movie


Making for Colored Girls: Tyler Perry on the poems he chose and why and different members of the cast speak

Music for Colored Girls: theme song plus two others

is available at resellers nationwide.