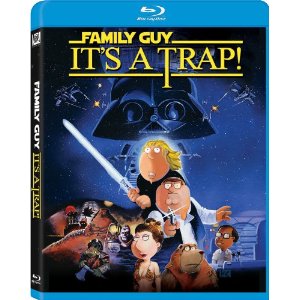 Ok, another Family Guy review should be nothing new here were my first thoughts when this movie arrived. Unfortunately, that was completely the case. Back on that in the second. So this arrived during my move and got lost in the shuffle, so sorry for the late review. This fortunately is one of the things that the wife to be and I can watch together. So, after we were settled for a minute we popped the blu-ray into my PS3. Today I am again joking about me looking more and more like Peter Griffin. This is the third in a trilogy of parodies of the Star Wars film (this one parodying Return of the Jedi).

The idea here is straightforward. Seth MacFarlane and his crew of geeky writers and animators have recreated the entire Star Wars trilogy with characters from the Family Guy universe. Peter Griffin becomes Han Solo and Brian, the family dog, Chewbacca. Pubescent son Chris is Luke Skywalker, and Leia, oddly enough, is Chris’ mom Lois (homely Meg is resigned to playing bit parts as gross-out monsters). Stewie, of course, is cast as a pint-sized Darth Vader. I am assuming that everyone has seen Star Wars and you know the plot.

The opening text crawl even half-jokingly advises us to lower our expectations for this third outing. It’s a caution well worthregarading, as the hit-to-miss ratio here is a good bit lower than it was in either of Trap’s predecessors. There are many in-jokes for people who have followed the mock-trilogy from the beginning—but after a while, it just now feels lazy and uninspired. That’s not to say, however, that there aren’t any laugh-out-loud-worthy moments here. If you’ve always loathed Return of the Jedi’s kid-friendly quality (like me), you’ll find irresistible how violent Trap is, from Peter-as-Han Solo having stormtroopers dig their own graves with their helmets and ordering them to stab one another in the mouth with knives, to a much more blood-thirsty portrayal of Ewoks.

The battle for Endor is turned into an ultra-violent massacre, with a whole bunch of “fun” with the AS-TS. Most of the jokes are based on off-the-wall-and-out-of-the-blue pop culture references, like C-3P0 entertaining the Ewoks with a translated rendition of the Fresh Prince theme song, and Alec Baldwin as Jabba the Hutt. AkA: Just read my review of Something Something Darkside.

This actually comes with my favorite special features of all of the Family Guy Blu-Rays:

• A Very Special Message from Darth Stewie: A “Voicemail from Long Lost Father to Son.”  –  This was the highlight of my entire watch I laughed so hard during this that it made up for all the weaker gags in the movie.

I understand now after writing my review why I did not like this film. I took the year off watching family guy so some of the jokes were lost on me. I lent the blu-ray to a friend who is a giant Family Guy fan and he loved every second of the feature.