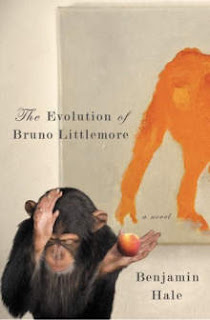 This novel is an unholy, ungodly mess of a novel. It is majestic, it is pedantic, it is petulant, it is poetic, it is full of boring linguistics and masterful paragraphs, and it flows like sludge, to erupt into joyous vitality. Ah, youth (and this pertains metaphorically to Bruno and literally to Benjamin Hale).

Perhaps “Gulliver’s Travels” by Jonathon Swift received the same first sentence from some alien reviewer (thank goodness, Swift was never as loquacious as Hale). You will simply have to know that you will hate it, love it, ignore a lot of it, and pay stark attention to – some of it. For the novel is an allegory, the allegory of the narcissistic society we have become. And the language and characters portray that narcissism; sometimes sharply, sometimes in a didactic, pedantic, chaotic diatribe. Do we throw the baby out with the bathwater? Absolutely not! Does the character development suffer – yes. Does the language bore us – often. And yet sometimes it swells into splendiferous magnitude. It’s a complicated mess.

For, while Benjamin Hale allows himself to get brilliantly stuck in the mire of his own language, with chimp paragraphs that swell like a pregnant belly, and as the language sediments to the bottom of the paragraph river with the current – the reader – rushing overhead into ennui, Hale still titillates our intelligence. Thank goodness I still have a good college copy of my Webster’s at my bedside. Words came at me like shrapnel. I want movement along with narcissistic genius, please. And then there’s Bruno, a.k.a. Hale, wallowing in himself like a hog in a swill.

That said, with Kurt Vonnegut irony and Faulkner-esque long windedness, and without control and focus, the novel remains an enigma. Hale may be ranging too far or not ranging far enough, but his novel encompasses every single human dilemma except Adam and Eve (and maybe I missed that part). It is a novel about many things.

On the surface, we have Bruno the chimp from the Primate House of Chicago’s Lincoln Park Zoo who has a propensity for language and everything human. He enters into a research project where he meets Dr. Lydia Littlemore, and he falls instantly in love. The project fails and he and Lydia become lovers. They reroute to Colorado and lounge at the nature preserve of the Lawrences. Add a little more sexual perversity from the Lawrences, along with bestiality, and Lydia and Bruno flee back to Chicago after two luminescent years, where Bruno learns to speak the language, to form logic, and to appreciate the arts. Then Lydia has a brain tumor and is pregnant with chimp baby. Lydia and baby die. Bruno joins a theater troupe, gets a new humanoid nose, murders a man and ends up incarcerated at the Zastrow National Primate Center in Georgia. Oh, I forgot that Bruno becomes a painter and furrows a reputation of some renown. Bruno is never dull!

Benjamin Hale has written a book that could only come out of the Iowa Writer’s Workshop – his diction and syntax hark back to William James. Words, however, become arrows that deflect us from the serious topics. Well, sometimes. Humanity versus animalism, Darwinism, vanity, pride, language, metaphor, love, loss, scientific cruelty and its justification on intelligent beings, justice, and the apple that Eve ate of knowledge (the Eiffel Tower is in there somewhere). And while he often loses his focus in garrulous and total “id” (as in Freud) driven Bruno, Hale also tends to our souls within discourse that shows great mastery and courageous risk.

So even though I often felt frustrated because the characters hide beneath a mound of words and rhetoric, when I crawled out from under the mound, I found I had read a harbinger of a novel that resonated inside me. You cannot help but fall in love with audacious bodacious Bruno. And in that same way, you cannot help but fall in love with an author of tender years who will no doubt develop into a huge talent in the years to come. Who maybe already has?

Hodgepodge, delicious hilarity, irony, stony defiance, language that either stutters or struts – this novel is an EVENT not a novel. And an event you MUST attend, for the tickets are already sold out.

Who knows what number this is? 0-5? All of them. Both/And delirious maniacal genius juxtaposed against deranged long windedness, it’s still an event and it’s still a great event to be read under the covers or in the cathedral! I applaud Benjamin Hale. He mirrors his subject, humanity. And if that was his intent, let’s go for the genius! A great read.

is available at Amazon.com and stores nationwide.