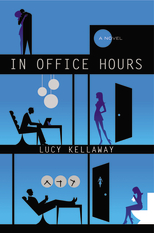 OK, readers, shine up your reading glasses. Many of you will like this book, some won’t, and some will have to take time to let it settle in. I am in the third bracket – after I read it, I had to go back and read some more. I had to take the time to absorb its message, because, like Stella and Bella, I began with a judgmental mind! My bad!

Since I’ve never gone out with a married man, I felt superior IN THE BEGINNING. I mean, I could ply you with DEMENTED men That I Have Gone Out With stories, but this is Kellaway’s book review not the story of my life. “In Office Hours” won me over fast as Kellaway strutted fine moments of emotional depth amongst her female protagonists.

Those said protagonists are two women who work in the office of a large oil corporation in Britain. Stella, the bigwig, head of economics and brilliant, enjoys power. At work. At home, she enters with an invisible veil while her husband Charles never hears a word that she speaks, nor notices her at all. Her kids, Clemmie and Finn, do their own thing. She walks out of her office into a home where she feels like an outsider.

Stella, a bright, vivacious and beautiful executive assistant to another female senior executive, Julie, is also brilliant and is overeducated for her job. But she has a child and is a single mom, so she keeps her mouth shut and performs her job. As the novel begins, Julie and James, a senior vice president have been outed in their affair. Since James is married, Julie gets the bad press in the company. And because she is female, she is fired, while James stays. She and Bella both scorn Julie – what was she thinking? But Julie has gone on to a better job and has learned some things about the corporate structure.

The juxtaposition proves brilliant, for both Stella and Bella, who feel nothing but contempt for Julie, follow in her footsteps soon thereafter.

Bella’s immediate concern is about her employment. Will she be shuffled into another assistant position, or will she be fired? As she ponders the situation, she finds herself placed as second in administrative command in James’ office pool. And when James comes on to her, she puddles into his arms.

Stella falls for a man 15 years younger than she. He’s just joined the corporation as a trainee and lands up in Economics, under Stella. Stella hates him on sight, and tries to transfer him into another department, but she cannot. Stuck with his arrogance and his lackadaisical manner, she is stunned. As Rhys throw cupid’s dart straight into Stella’s heart, Stella finds herself obsessed with him, and the two fall madly in love and in bed.

When both women traipse through the forest with their men wrapped around their thighs, they are caught out by upper management. And they are fired. And James and Rhys dump them. As they tangle themselves out of the web, they both go on to find better jobs and to appreciate the good things that came from their affairs. James proposes to Bella after his wife demands a divorce. Stella says no after a year of suffering. Rhys finds a younger woman and marries her, and Bella realizes that she actually feels happy for him. These women are poignantly portrayed in Kellaway’s dynamic novel, and their emotional twists and turns ring so true that we want to cheer for them.

Kellaway delivers a novel quirky in its British dialect, but charged with a presentation that captures the essence of these womens’ lives. This book is not a political one. Kellaway makes no judgment. And I found at the end that I was a wiser person for having read “In Office Hours.” For any situation can captivate and trap our hearts and emotions at any time – none of us are non-susceptible. Gracious, captivating, intelligent and often gripping, “In Office Hours” held me captive until I put it down.

is available at bookstores now.