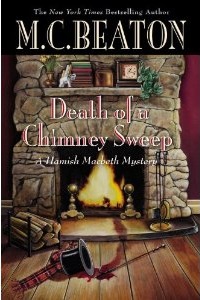 The Death of a Chimney Sweep

I NEVER miss an M.C. Beaton mystery novel, whether it’s Agatha Raisin in the Cotswolds or Hamish MacBeth in Lochdubh, Scotland! I have read every single book in both series!

In Death of a Chimney Sweep, Hamish MacBeth hones his Sherlockian skills to a sharp point. When Captain Henry Davenport’s body is found stuffed into his own chimney, his wife Milly calls Lochdubh’s police station. Hamish speeds to the nearby town of Prim, and discovers Milly Davenport weeping. Captain Davenport had told Milly he was going for a walk and to call the local chimney sweep, kind Pete Ray, to clean the chimney that morning. When Pete’s body is found on the moor, Hamish has two murders on his hand, and a fragile and slightly crazed Milly to deal with.

With a rollicking round of strange characters – Superintendent Daviot, Hamish’s boss, Detective Jimmy Anderson, and nasty Detective Inspector Blair, Hamish’s nemesis, Hamish tries to solve his crime in spite of his superiors. And then there are the inimitable townspeople – Priscilla-Halburton Smythe, Hamish’s ex-fiancé, and the usual round of Lockdubh eccentrics, and Beaton assures us of a myriad of crimes and romantic fumbles and tumbles through the grounds of the strange Scottish moors. Angela Brodie’s madcap novel with Hamish as the love slung adulterer brings him nothing but trouble – and as we all know, Angela and Dr. Brody are happily married and Hamish gets off the hook! Throw in Betty Close, Elspeth, Lugs, the brute of a dog and Sonsie the wild cat, and you have a mystery novel that resembles a tumbled skein of wool!

When widowed Milly falls for a fast talking, fast paced, funny reporter named Tam, the novel becomes intriguing and unputdownable, and Hamish trundles across the moors and nearby towns as more murders pop up. He discovers that 4 men (Ferdinand Castle, Thomas Bromley, John Sanders and Charles Prosser) have been badly scammed by the con-artist Captain Davenport, and he follows Prosser directly to the murders.

I usually give a synopsis, but since ALL M.C. Beaton fans NEVER miss a new book in the series, let me just say that Beaton has outdone herself in this strange and elusive mystery, the best in the Hamish MacBeth series that I have read. And Hamish, an old friend, as always, solves the murders with more twists and fumbles with the ladies than he’s ever done before! My only request, Ms. Beaton, is – I miss piggy Ms. Agatha Raisin, and her man hungry ways – can we expect a new novel soon?

is available at Amazon.com on pre-order (and will be available in bookstores beginning February 25, 2011)