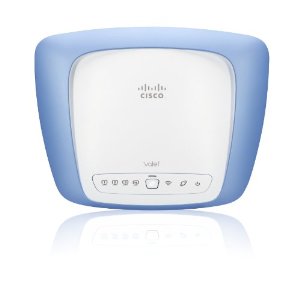 Every place I have lived after college had internet and as some of you may know I just moved.   So after the first night of unpacking I would like to relieve my stresses by shooting people on my Playstation.  I am an avid Call of Duty player.  My wife-to-be opened our net book to find that there was no place to steal our internet from. Our neighbors all had secure connections and she needed to give information to some of her sorority sisters for the upcoming rush week.  This hell lasted two weeks. We were unplugged for an entire half a month.   We could only facebook and email with our phones.  I can not explain how annoying it is to turn your facebook and email (for all our accounts not just the ones you check) notifications on.  Our phones beeped at
least 1,000 times a day. That is until the Cisco Valet arrived.

First of all, I really demand a lot from a router.  We have three smart phones, two gaming consoles, and two computers; sometimes they’re on all at once, this is also spread between two floors.  That really puts a lot of stress on a router.  So I was really hesitant that anything can handle the amount of equipment over the amount of space that we have. Second of al,l I was a little apprehensive about it because there are no product details outside the box. There is also no instruction manual inside but the USB key is prominently displayed. It simply instructs you to plug the USB key into the first computer.  There were a few pictures of how to insert a usb drive into a computer. Then I just went for it.  This router was nearly plug and play.  It was so easy to use and setup.  The router and usb key do most of the work.  I just plugged it in and went downstairs to make a sandwich, when I got back upstairs a few minutes later it was done. When it’s done you just adjust the setting to how you want it such as securing the network.  This did take a bit of clicking around to see all the settings and how to turn off the guest network.  Every once and a while I would yell up to the wife to be to check how the connection was.  Each time she said it was fantastic.

From the move I have gotten a little happy with the power drill and have gotten really good with mounting things.   I hung the valet on the wall behind a ficus tree to keep from having too much clutter.   By the way this all took less than 10 minutes.  Without question this is the easiest computer supplement device I have ever used.  I have had a mouse that took more setup time.


I was so happy with how well the Cisco Valet  was working that I signed up for Netflix.  To see how well and strong the connection was I took my gaming console to the other end of the house and up a floor to see how it would stream.  I was really determined to find a flaw in the valet. Unfortunately I could not.

is available where computer supplies are sold.

We received product for our router review. All opinions are our own.