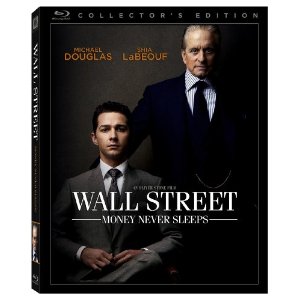 It’s not a secret that I am not a big fan of Oliver Stone’s work. Well, I only like some of his work.  I’m a huge fan of Talk Radio, Salvador, and JFK (I really think JFK is a fantastic work of an art).

There are two potential readings of this film.  One is an outline of the banking crisis and the stock market crash 1998.  The other is analysis, just like the original, of greed.  I sat down with very low expectations after a long day of moving into my new place.  The wife to be was not really into watching the film saying that “I’m not really into stocks and bonds and trading, it’s really boring to me but Shia LeBeouf is cute.”  She was in and out of the room and just thought the film sucked.  I however within the first five minutes was
hooked by the David Byrne and Brian Eno score.

There are three interwoven storylines.  First, the one we have been waiting for Gordon Gekko.  He is like a Greek chorus; he begins with all the answers and reveals it to the characters as they progress.  He is also waiting to pounce and capitalize on the bursting banking bubble.  The film also wants you to question whether he is the slim ball from the original or had he turned over a new leaf.  Second, there is Jake Moore (the beef). He is looking for revenge for his firm going under and the subsequent suicide of his mentor.  So he goes to work for a rival firm, run by Josh Brolin, looking to take it down. This also entails getting investors for this green energy that he has a lot invested in.  Third, there’s also a romantic plot concerning Gekko’s daughter being engaged and pregnant with Jake.  Gekko is also trying to reconnect with his daughter, who no longer wants anything to do to him.

While the film was not brilliant I did think that it was very good. It was very interesting to see a retrospective fictionalized account of an event I really remember well.  Although, I do think that it was a bit too soon to reflect on this.  I really wonder what the intent of this concept was.  Because it really does not seem like this film was intended for the everyman.  The events in the film had a lot of effect on the middle class and there very only one representation – Susan Sarandon as Shia’s mother.  It really showed why the housing market is so bad right now.  But unfortunately, this was only shown in two scenes and could have been a very compelling storyline, but ended up more like an afterthought.

All of the actors knocked it out of the park, I really dug Frank Langella’s performance.  Douglas is in top form here two.  I just really did not buy “the beef” as a Wall Street super genius.  I really thought the real star of the film was the score.  It sounds great.


Cashing in on Special Features:


•  Commentary by Director Oliver Stone: As expected, an insightful commentary

•  A Conversation with Oliver Stone and the Cast of Wall Street: Money
Never Sleeps: Oliver Stone, Michael Douglas, Shia LaBeouf, Carey
Mulligan, and Josh Brolin sit down to talk about the film and the
current economic situation. Meh.

•  Money, Money, Money: The Rise and Fall of Wall Street: A series of
excellent featurettes.

Over all it’s a pretty good rental fare.  Easy to watch but can come off as a bore at times and a bit overdramatic.  The film is also quite the engaging melodrama and it’s a very interesting lesson in current
economics.

is available nationwide.
Ratings are based on a 5-star scale