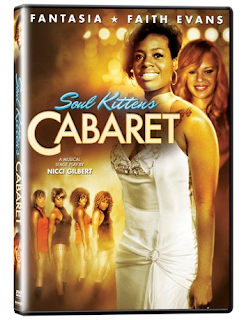 There’s nothing like watching live theater, and Soul Kittens Cabaret brings the stage to your home on DVD.

It’s been a while since having the pleasure of watching, or rather listening to the ever talented Fantasia Barrino and the fact that she started out the first few minutes of the show with a song brought a smile to my face. Unfortunately, the show had a difficult time keeping that initial momentum.

Set in a modern day burlesque club in Detroit, Soul Kittens Cabaret follows the seven women who perform there as they struggle with good conscience (played by Barrino) against bad (played by Faith Evans). This hot, sexy club brings out the worst and then best in these women as they deal with temptations and weakness, until they learn the real meaning of sisterhood.

While the story is a bit trite, it lends itself well to a stage play. Unfortunately sometimes the live acting appears to be OVER acting, probably a result of not watching it in a theater. The high point of this play are the musical performances (no surprise), of which there are not enough of. As the play progresses the acting gets progressively better as new characters are introduced. I only wish they had cut part of the middle out, as I began yawning over a story that was stretched too thin and acting that was only marginal.


Photos – Pretty standard stuff, although there were a few nice tableau’s.
Behind the Scenes –  fun watching the rehearsals. It was actually a lot more organized looking than the actual play.
Trailer – Standard trailer, nothing worth writing home about.