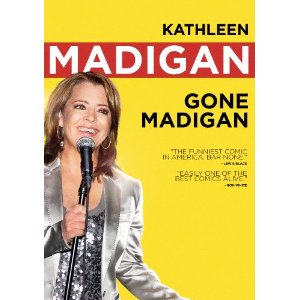 There are FEW comedians that I really enjoy, but having been a HUGE fan of Last Comic Standing, I have to say that Kathleen Madigan is one of my FAVES. She’s always been honestly funny without that poor me or insulting type of humor. She’s a LIGHT shining in a sea of self deprecating comedians who have you laughing AT then rather than with them.

“Gone Madigan” is Kathleen at her BEST – doing stand up. From imaginary illnesses to the tour of the Mormon in Salt Lake City to illegal aliens (we should “vote people in and vote people out”) and the economy, her spin on what we can do to repair our situation is hysterical. I love the fact that she’s blaming the demise of the economy on Oprah. I won’t give it away, but you’ll be shaking your head in agreement while laughing.

Gone Madigan was filmed LIVE and as such some of the camera work (hand held) is a little iffy and the audio has LOTS of audience noise, but personally I found that to be “real” vs. annoying.

For those who’ve enjoyed her on The Tonight Show, The View, Last Comic Standing and her HBO special, you WON’T want to miss this one.

Interview – Nothing to write home about. She shares her notebook with jokes, etc.
Behind the Scenes -From arrival to show, more of a “day in the life” of…with Kathleen and her family.

is available at Amazon.com and other fine DVD retailers.