You are here: Home / They Read / Book Reviews & Giveaway: The Inner Circle 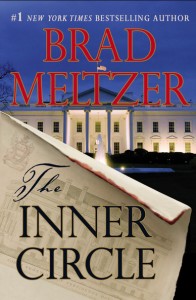 This novel seduces sweetly, then kicks out with a steel toed boot. A thriller as good as Michael Jackson’s! Definitely not a wham-bam-thank you ma’am, Meltzer’s plot replaces Dan Brown’s The Da Vinci Code with its circular and insular contortions, providing substance and thrills by the second.

Beecher works in the National Archives in Washington, D.C. As an archivist. His last relationship, which failed, has left him in an emotionally empty vault. No surprise that Beecher is then thrown into the real vault, the SCIF, the room where Presidents only are allowed to read any historical document they so desire. However, an archivist always has to remain present in the room – along with the Secret Service.

In Beecher’s emotional room, he finds himself emailing Clementine Kaye, the first girl he ever kissed in 5th grade. They decide to meet and Beecher offers to show her the Archives, including the President’s SCIF. The cast includes a national security guard who works in the Archives named Orlando, who happens to be with Beecher and Clementine when they enter the room – with a cup of coffee. Orlando and Beecher come from the same small town in Ohio and are friends. When the coffee spills, all panic, for the President is due any minute in his room, and Beecher and Orlando have compromised security by allowing themselves in the room. And they have brought in a complete stranger – Clementine, who Beecher finds alluring and caring. They get out – seconds before the President. But when Clementine cleans the coffee off the table, she tips a chair – and finds an ancient dictionary under a plank of wood hidden in the chair underside. And the games begin.

Beecher discovers that the dictionary, with almost no pages left, is the Enrick Dictionary which he believes belonged to George Washington. Almost immediately, he discovers that Orlando has died – of a supposed heart attack. And he goes to Tot, the 72 year old archivist who is Beecher’s best friend and mentor. Tot warns him that he has lost his heart to Clementine, whom he does not know anymore. And Beecher disallows Tot’s advice. Clementine has asked Beecher to find her father, from the Archives. And Beecher does. And when he reveals Clementine’s father’s name, up goes the ante. When Beecher visits Clementine’s father in a death row mental institution, Nat tells him information that he needs. Dallas, another archivist, enters as either friend or enemy, Beecher doesn’t know. They discover that the book contains messages in invisible ink with codes to prepare the President with warnings – from his Plumbers.

This novel not only performs the mystery crime dance, and the secret society dance, it outlives both to turn in many other forms of performances that quicken that taut plot and keep the reader on the edge of their chair. Historically fascinating and filled with characters that seep into our sub consciousness, we follow Beecher as he tries to ascertain who is who and what is what. For the President has a secret society called the Plumbers, filled with personal friends who protect him. And there is another secret society called the Culper Ring that protects the Presidency, not the people who acquire the office.

Superb drama, great writing, stunning inside drama that reports back to no one except Beecher himself. Get it. Read it. Love it.