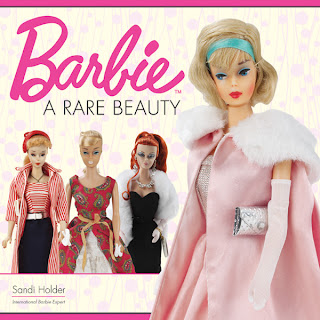 Author: Sandi Holder – International Barbie Expert
Sandi Holder knows an icon when she sees it!  With a sick son, Holder needed to make a living from home and started digging into Barbie’s long history in the 1980’s, opening her successful store the Doll Attic in 1989.  She was Mattel’s first Dealer of the Year in 2004, and has appeared on The Today Show, and her store the Doll Attic has been featured in The New York Times, CNN.com, Newsweek and others.
I know exactly how Sandi Holder feels!  When I started collecting the Barbie series of I Love Lucy characters for my daughter in law, Barbara, who loves all things Lucy, I became immersed in Barbie lore.  I started collecting the Bob Mackie series and the Holiday series of Barbie dolls because I love art – and I consider these dolls art in many ways and forms.
At auction, many of the 1960’s and collectible Barbies have sold for more than $25,000 – by Holder.
This beautiful coffee table book begins and ends with the magic of Barbie:  “She is us – and we are her.  That affinity – that strong emotional connection – is likely the main reason the Barbie doll has become a successful global and a cultural icon for more than 50 years.  But the real secret to Barbie’s success lies in the power of nostalgia and emotion.”
Three Barbie dolls are sold every second according to Mattel.  Born Barbie Millicent Roberts, the doll first appeared at the New York Toy Fair on March 9, 1959, selling for $3.00.  Since then, Barbie has remained the hottest doll in every girl’s fantasy toybox, with succulent accessories and outfits that demand a Donna Karan audience.  This is not just a doll – it is an event.
This book details how Ruth and Elliot Handler, co-founder’s of Mattel, a combination of their last names, created a Barbie that changed and recreated herself with every decade, and that has become a memory for all of us as we all adored our childhood Barbie dolls.  “Our parents and grandparents have grown up with it,” said Mattel’s principal Barbie designer Sharon Zuckerman.  “It’s been generations of people playing with it…and she’s just so beautiful.”
Along with pictures of the Handlers with early Barbie dolls, this book covers every generation of Barbie dolls, with amazing pictures that startle and contain an excitement and allure that only collectible Barbie can offer.  An amazing array of beautiful styles, dolls and the best of the Barbies creates a panoramic book that displays itself like a book on Botticelli.
All people collect something: it reminds us of good memories, of the ability of toys and collectibles to become art, and beauty is something that is universally craved and collected.  This book will rest on my coffee table for a long time to come; the artwork is of a quality that demands respect and admiration.  I loved playing with Barbies and I still buy them for my grandchildren.  I also love my collectible Barbies.  I can only say that I wish I was Sandi Holder, for she holds in her hands a collection that reminds us that time is evanescent and that our childhoods stay with us forever.  This is an absolutely dazzling book that I will cherish for years to come.
Barbie A Rare Beauty

is available just in time for the holidays at Amazon.com.