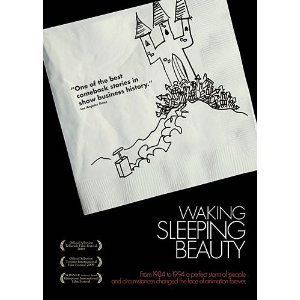 Early 1980’s. Disney’s animation group is practically defunct, getting shuffled from building to off site building to trailer lot; The Lion King’s roar a distant muffled scream on the animation screen.

1984. New kid on the block. Jeffrey Katzenberg saunters in as head of Disney film production, muttering through his fine chiseled lips” “We’ve got to wake up Sleeping Beauty.” In the background, a snort was heard. It was Sleeping Beauty herself. Someone stepped on her transparency.

So begins the rescue operation initiated by Roy Disney, Frank Wells, and Mike Eisner – the heads of the studio – when Katzenberg arrives. And arrives is the correct word. Beginning a heads-of-Disney fru-ha-ha that lasted into the 1990’s comeback of Disney animation and co-partnership with Pixar, Katzenberg started to rattle the “there’s no more Walt Disney let’s get on with it” cage.

Waking Sleeping Beauty, produced by Don Hahn, documents the entire Disney schema to shake up Disney’s fallen animation – and it is quite the colossal ride.

While the animators dressed in 60’s frock and playing 60’s roles, produced Beauty and the Beast and other Disney classics, the Disney heads played Rock the Boat. Katzenberg’s chutzpah and zealous personality clogged the pores of Eisner and Roy Disney. In 1994, Katzenberg went for President of the studio when Wells died. CEO Eisner had a fit, and a new play came into Hollywood Town – the little known at the time genius, Steven Spielberg. Dream Works was born, with Spielberg – and Katzenberg – at the helm. And suddenly Disney had fierce competition in a field that had been theirs alone – animation. How this all played out is anything BUT a business-as-usual story about studio heads and the new and avant garde field of animation. Fascinating, full of egos, Disney myth and truth, and the success of Roy Disney et al proves a beyond fascinating documentary that is not to be missed. Absolutely fascinating, fast paced and as dramatic as any Disney film that I have seen!


Why Wake Sleeping Beauty: Don Hahn, Pete Schneider – how surprised they were that this movie worked – celebrating the people who were there at the time


Deleted Scene; Black Friday, Howard’s Lecture (Howard Ashman), Losing Howard, Recording “part of Your World”, Research Trips, To Sir With Love, The Sailor, The Moutain Climber, The Artist and the Poet
Don Hahn speaks of the four men that created and ran Disney

The special are all worth watching, and I loved the film with commentary.

is available for purchase at Amazon.com & DVD retailers. 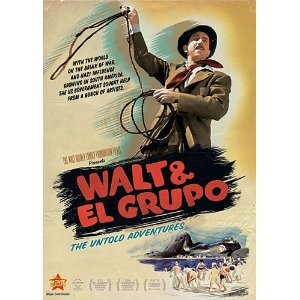 The second documentary in this three Disney series is Walt and El Grupo, the story of 1941 Disney Studios and the financial cleft left in the studio pockets due to wartime economy. So the United States government asks Walt Disney to visit South America to seek ideas for new animated films. In actuality, the US government wanted to send an ambassador speciale to the South Americans and who better than Mr. Disney himself? Knowing that he would say no, the government voiced it as a reconnaissance mission for new animation ideas. Clever!

Disney acquiesced, traveling with 18 studio employees, on Uncle Sam’s dime, and hit the major targets, including Brazil, Chile and Argentina.

This documentary does not stand up to the scrutiny of Waking Sleeping Beauty. Rather one dimensional, and (I know this is a bad word) boring, perhaps it would have been better for Walt to go under than produce a documentary wherein the US government saves his behind. In the end, the goodwill was found and two Disney movies, Saludos Amigos and The Three Caballeros were produced.

The bonus features were not something I thought I could deal with after 107 minutes of El Grupo. I can tell you that they will be boring also, however.

is available for purchase at DVD retailers and at Amazon.com. 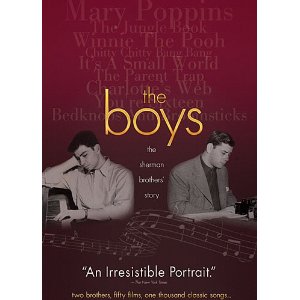 Ok, this last documentary had a big thing going for it – it is one minute less of watching time! The Sherman brothers, in the Disney documentary The Boys, were the biggest and brightest of Disney’s team of songwriters. Through fifty films and one thousand songs, great songs such as “A Spoonful of Sugar” from Mary Poppins and “I Wan’na Be Like You” from the Jungle Book, the brothers were a one dimensional team of unhappy relatives. Their brilliance did not mirror the difficult relationship that these brothers shared, born from their parents who also held grudges against each other. Disney’s attempt to bring the brothers to true brotherhood is a trite and superficial rendering of two brilliant and complex brothers. While somewhat interesting, and a story about how their relationship almost destroyed their magical genius with songs, this was another so-so for me, although this view of 60’s Disney nostalgia is great for Disney nostalgia fans. I just couldn’t get into it, and I tried. Honest Injun!

is available for purchase at retail outlets nationwide.

We received these DVD’s in order to facilitate a review, all opinions are strictly our own.