You are here: Home / Fun / DVD Reviews: The Sorcerer’s Apprentice 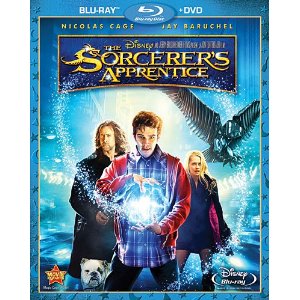 I would have really dug this film if I were still a 10 year old. But as an adult this film is moment after moment of failed opportunity. This could have been a really good film filled with great ideas but it’s not. It been a little thing called Turttletaubed! More on this later…

I popped this film in with the greatest of hopes. I really enjoy Nicholas Cage. I know I’m in the minority on this I know. He is over the top and ridiculous and who doesn’t love his hair. I really enjoy the wigs of Nicholas Cage over the past decade. Each wig has
perfectly matched the character. He comes from the great school of hair acting. My future wife had no intentions of watching this film so I was off on this journey alone.

And what a journey it was. The plot was far too complicated and contrived for me to care at all but here goes a try at a synopsis.

Merlin had three apprentices: Balthazar (Nicholas Cage), Veronica (Monica Bellucci) and Horvath (Alfred Molina). He not only established every one immortality, he imparted to them his wisdom and secrets, and foretold about the pending of the Prime Merlinian (I know lame), an upcoming sorcerer who would have the supremacy to kill Morgana. Sometime after that, in an ensuing battle, Merlin was murdered,Veronica  sacrificed herself to imprison le Fay in an enchanted doll called the Grimhold, and Balthazar began his tireless search for Merlin’s successor. Then he traps a bunch of other baddies in the Grimhold. Then we find some kid who is the successor to Merlin and then they set on a quest to stop some impending evil. There’s plenty more but just some really out of the box stuff.

This film is just like Jon Turtleltaub’s past two runs with the National Treasure franchise. Only less good. There are two serious problems with this film. First is the plot, its super lame. There is no upside. Second, is the wizardry. This is only a bit lame, just a bit anti-climactic. Just a bunch of hiduken Street Fighter plasma balls. The only thing that was cool was that the magic was all physics based. While it was only briefly explained, I’d say that they did a really a poor job of an explanation.


The saving grace of this film was the acting. Nicholas Cage was excellent as usual. He was funny and over the top as needed as well as pulled back and interesting when he needed to be. Jay Baruchel did not disappoint with any of his physical comedy, he showed expert timing with every gag especially the play on Fantasia. There was also some excellent visuals such as the show down in Chinatown, a scene that really needs to be seen. The composition and colors were excellent.

Overall a pretty disappointing feature. But it is on par with theseries of live action films that Disney has put out recently. This film was entertaining enough to satisfy me on a minimal level.

is available for purchase online and in stores nation wide.