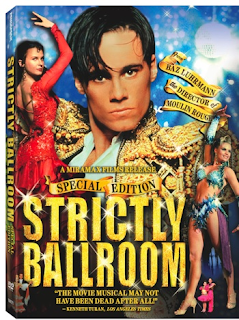 Under a rock…that’s where I live. Why? Because this was my first screening of Strictly Ballroom. Me…lover of the eclectic, the comic and the slightly off-beat had NEVER screened what I’d consider to be one of the classic tongue in cheek films by director Baz Luhrman (director of such films as Moulin Rouge, Australia and Romeo + Juliet). Bro “B” was in SHOCK when I told him that.

For those who love films such as “Best in Show” and other mockumentaries, “Strictly Ballroom” waltzes by with it’s quirky style mixed with a touch of reality. This mix of Luhrmann’s own background in ballroom dancing (his mother was a teacher and Baz himself danced as a child) and outrageous caricatures is laugh out loud funny.

Starring the HOT Paul Mercurio (sorry, but he’s classically handsome and the movie could have been a DOG and I’d have watched it all the way through) as Scott Hastings the dancer slated to go forth and WIN the Australian Pan-Pacific Grand Prix of ballroom. Unfortunately, Paul has a creative side that longs to dance his “OWN” steps much to the dismay of his mother and the board of the competition. When Paul partners up with the plain jane Fran (played by Tara Morice) to dance a REAL Pasa Doble as taught by her hot blooded father (played by the great Antonio Vargas), it puts FEAR into the hearts of those who believe that you must play by the rules.

Good prevails against evil in this cartoonish play turned film. The REAL stars of this film are the costumes, which are not that far from reality as well as the dance sequences by the great flamenco dancer Antonio Vargas.

Don’t be like me….grab a copy of this DVD, sit back and enjoy the dance.

From Stage to Screen – This follows the progress from inspiration to the original stage play and how it finally came to be produced as a film. It’s a fascinating journey about the director’s background in ballroom and the trials of being a young (25 year old) director.

Samba to Slow Fox – There’s nothing like the REAL THING, especially when you’ve just watched Strictly Ballroom. You realize just how close to reality this funny movie is.

Deleted Scene – Thankfully, there was only ONE deleted scene and it would have spoiled what was to come had Luhrmann included it in the final cut.

Design Gallery – A series of very interesting glimpses into the marketing of the film, the background of the director and more.

Audio Commentary – As a general rule, I find it a bit annoying hearing the director speak over the film.