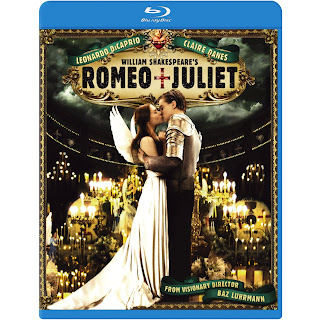 Something really impresses me every time I watch a Baz Luhrmann film…the design. I received both of these Blu-Rays and was very excited but I was a bit perplexed on why it was not included with Strictly Ballroom (a vastly and more personal film and from my view better). While I still have not seen Australia I can really imagine that it is as beautifully visual construction as all of his films. So time and time again I tried to get Moulin Rouge into the player (I know I had never seen it). And I really had trepidations about watching Romeo + Juliet again – love the design hate the movie (well in the past). So I cozies up with the wife to be and we had a chick flick night.

Time for a synopsiss (sic)

Ok, if you don’t know the shorthand version of Romeo + Juliet then you should be beaten the streets with a tack hammer. It is set in California in a fictionalized Verona beach kind of a SoCal meets Rio D’ hybrid. The film opens with a gas station gun battle that erupts when the white Montague boys bite their thumbs at the Cuban-American Capulets, led by a soul-patched John Leguizamo as Tybalt. The sequence is pure low-riding gangsterism mixed with archaic Shakespearean insults and a surfeit of Catholic imagery. The Capulets wear
bulletproof vests adorned with cross-stitch renderings of the virgin Mary and Jesus. The stocks of their Sword-brand pistols—get it? Its all kind of meh from there. Well unless you are a tween. This was the twilight of the day only better than twilight much better. 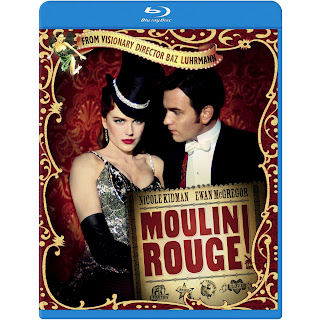 Honestly, I had never seen Moulin Rouge. I felt like it was just like Romeo + Juliet. In terms of its story, Moulin Rouge is nothing new, but visually—and musically—there’s nothing like it. Baz Luhrmann is a stylist extraordinaire and Moulin Rouge is a nonstop assault of color and sound, a mix of Bollywood theatrics, hopeless romanticism, and froufrou turn-of-the-century debauchery. Of course, there’s the
dizzyingly effective main conceit of using pop songs anachronistically, much like Marie Antoinette.

Neither of these films is all that brilliant. In terms of story and acting both of these films are seriously lacking. The editing is a hyperactive mishmash of quick cuts. Moulin Rouge is basically a Toulouse-Lautrec painting in motion and I imagine Baz Luhrmann would take that as the highest possible compliment. Not everyone would. The non-stop eye candy and sugary story may get a bit too nauseating for some, and if you’re adverse to musicals to begin with, the over- the-top nature of Moulin Rouge probably won’t win you over. The same goes for Romeo + Julie,t except the acting is much better except for John Leguizamo (who had just come off the set of The Pest)

What is brilliant is how each of these films look. The set design is of the greatest ever created. While some of Romeo + Juliet looked like it got ripped of an Ed Hardy T-Shirt it still manages to work within the confines of the film. The blu-ray qualities are just amazing in this department because they are working every second to make all the colors pop right off the screen. If you are showing off your tv quality then these films are for you.

There are plethora’s of special features with both of these films Fox really did do a fantastic job covering these disks. On both disks there are must see features about the Music and excellent commentaries. I really enjoy listening to Baz, and if I ever meet him I would love to see him dance (you really have to listen).
Over all I would have really liked to see Strictly Ballroom included with these. These are get looking films with so much eye candy and ear candy that their charms are undeniable. But for me that just is not nearly enough.

Overall: 2 Bright Colors out of 5 for both films.