You are here: Home / Fun / Books / Book Reviews & Giveaway: The Wolves of Andover 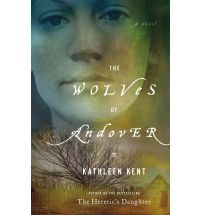 The Wolves of Andover

With a ferocious attention to detail and historic time, Kathleen Kent showers authentic characters within the storm of London, England and Billerica, Massachusetts 1673. The English Civil War and the time warp that creates colonial Massachusetts provide the stark contrast between Empire and colony. Juxtaposing England’s King Charles II against colonial New England provides a frame for the sometimes savage, sometimes poignant story of Martha Allen, an old maid at 20 and the search for King Charles I’s New World killers. From New England to London, political assassination to the love story that abides within Martha’s tart independence, this novel swings like a censer between two worlds.

As Martha is bound in service to her cousin Patience, a weak and petulant woman, she encounters a man with whom she eventually forms an alliance – a mysterious and self willed man named Thomas, who matches her stark nature. Thomas indentures himself to Daniel and Patience in trade for fertile land, and has one year to go to acquire his land. When Thomas tells Martha of his past, they become entwined in love and survival, for Thomas’s past in the English war may bring them all death.

The thematic of the novel arrives in the form of wolves as they prey on Billerica, and structure the dangers of the Crown and the King of England against the settlers in colonial New England.


Like Anne Perry, Kent brings vital life and authenticity to the harsh life and the harsh land of the new colonies; however, Kent presents scenes of savagery, courage and daring in a brash way. Unlike Perry, her novel is full of domestic strife and shows Martha and Thomas in their entire splendor – fault lines as well as strengths.

This well crafted novel evolves within every chapter to enclose us within the circle of wolves – the savagery as well as the ingenuity of an England bent on vengeance and a Crown impoverished with mistresses, political betrayal and depravity while Martha and Thomas fend off the sharp brutal teeth of attack.


Ponderous and thought provoking, the Wolves of Andover is not for the timid. I found it a compelling portrait of the reality of life in the colonies as well as life in London, and I immediately fell in love with Martha’s spirit and story.

The Wolves of Andover: A Novel

is available for purchase online at Amazon.com and bookstores nationwide.