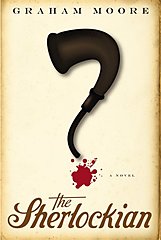 Doyle feels dimmed by Holmes’ light. Devising a plan in 1893 to kill off his meddlesome creation Sherlock Holmes, Doyle seeks a last brilliant plot wherein he can murder his greatest character – and his biggest competitor. And so…”Arthur killed Sherlock Holmes by the light of a single lamp.” Doyle writes in his 1893 diary: Killed Holmes.

Past to present, this novel undulates from 1893 as Arthur Conan Doyle plots to kill off Sherlock Holmes, and January 2010, where a motley group of Holmes’ devotees called The Baker Street Irregulars meet to celebrate Holmes’ birth date of January 6th. Harold White, a 29 year old researcher, is their latest inductee into this most prestigious group of Holmes’ followers. The Baker Street Irregular’s driving desire is to find Arthur Conan Doyle’s missing diary from October 11 – December 23, 1900, just previous to Doyle’s penning of The Hound of the Baskervilles. When Alex Cale, the richest and most distinguished member of the group emails his cohorts that he has found the diary and will present it at the upcoming annual convention, excitement and hysterical drama infuse the group. However, Cale feels that he is being followed. At his entrance to the hotel, he tells Harold and Jeffrey Engels that he fears for his life. As the group gathers for Cale’s exposition, Jeffrey Engels expounds on Cale’s discovery and introduces him; but Cale has not arrived. As Jeffrey, Harold and Sarah, a reporter, rush to Jeffrey’s room, they discover Cale dead on the floor of his room.

Doyle finds himself shattered when his readers berate and hate him for killing off Sherlock Holmes. People in London wear black arm bands decrying Doyle’s arrogance at killing off their favorite hero. Doyle is outraged.

Harold, Jeffrey and Sarah stay in Cale’s room as the hotel manager leaves to call the police. Using Doyle’s detecting methods, Harold studies the scene for clues. To his astonishment, he discovers that Cale has been strangled with his own shoelace, and behind the desk, written in blood, stains the word ELEMENTARY, still wet. He, along with Sarah, serving as his Watson, devise a plan to find the murderer – and the diary.

October 1900 – Doyle ponders the 7 years since Holmes death as he sits in his new mansion. He saunters from his study to get the mail – opens a package – and a dynamite bomb lies inside, but does not detonate. Doyle sees a drawing of Sherlock Holmes in the box, and a letter. As he eases out the letter, he hears a click – and sees the fuse ignite. He runs from his study as fast as he can. The explosion throws him backward, as his study shatters and shards of glass scatter. On the envelope is written one word: ELEMENTARY. At the New Scotland Yard, Doyle finds the incident almost ignored in importance by the detective in charge. He reaches into the envelope and shows the detective the newspaper clipping describing a murder of a woman in a hotel room with a white wedding dress rumpled next to her. She bears a tattoo of a crow with three heads. Doyle decides in a rage to find the killer himself, as he assumes the killer left the message for a purpose; his next victim is certainly Doyle.

So begins The Sherlockian, as Doyle and his friend Bram Stoker dig into a murder scene that he describes in his journal – the same journal that has gone missing. As the novel jumps from murder 1900 to murder 2010, Graham Moore locks us into a dead heat in a marvelously written, brilliantly executed novel of intrigue and mystery. Coiled and ready to strike, each page delivers a rattlesnake’s venomous bite. Doyle, Bram Harold and Sarah are on the trail, and all are feverish to discover the murderers, each in their own context, each with their own agendas.

With fluent ease, Moore captures both the tone and pace of the late 1800’s and the present, 2010. Moore’s voice is confident, and he stains the page with London streets and alleys as competently as with the jargon and dialogue that jangles in the present. This writer becomes quixotic at times when the need arises; and patently logical when plumbing the depths of Doyle’s imagination. The novel runs with the wolves – every page becomes its own river running true.

One of the most startling, oftentimes funny, totally relishing and starkly tantalizing mystery novels of the year, The Sherlockian stalks your brain and prowls into the dark corners of Sherlock Holmes’ genius and appeal. Elementary, my dear Watson! DO NOT MISS IT! Stunning in repertoire and performance, Moore has a deadly winner on his hands!

is available for purchase at your local book dealer as well as on Amazon.com