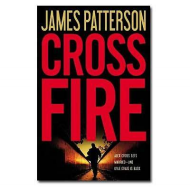 Kyle Craig, as all Patterson fans know, is Alex Cross’ biggest nemesis. Once friends and FBI co-workers, Craig’s enormous ego and satanic mind almost annihilated Cross and his family in previous novels – until Cross put Craig in federal prison. Now Kyle Craig is out – and on the move – slashing with genius brutality onto Cross’ Washington, DC – and FBI – turf.

Washington, D.C. has attracted a pair of marksmen extraordinaire, murdering high profile, greedy and dishonest politicians with one bullet to the brain. As the snipers score perfect hit after perfect hit, Cross and Siegel fight against each other for jurisdiction on the case: MPD versus FBI. Cross has no suspicion that Siegel is Kyle Craig – nor does anyone else.

Added to the mix, homeless people are being murdered by a ritualistic killer whose MO is intricate numerical carvings on the victim’s foreheads – and now, mathematical equations carved into the latest victim’s back.

Cross presents Detective Bree Stone with a stunning engagement ring and they prepare to marry – and Ali’s mother and Cross’ former lover, Christine, shows up at Cross’ home – breaking the custody agreement.

As one disastrous scene after another pursues Alex Cross’ attention, he gets a call from Kyle Craig, threatening Cross and his entire family. Alex Cross must now defend his family and Bree – once again – from Kyle’s oh so real threats to their lives. And Alex has no idea that Siegel, partnering with him on a daily basis, and stalking him – is Kyle Craig.

Delirious with action and taut drama, Patterson seeks to contain this spellbinder within the pages of Cross Fire – but Cross Fire runs rampant with incantatory scenes that rip and tear into the realm of Alex Cross’s very existence. Cop, father, fiancé – Craig blasts through to implant his ferocious vengeance on his arch enemy. Craig’s every calculated move sears against Cross’s tundra, to erupt into a conflagration both fierce and acute. The flames course through every page.

Cross turns to Howard University math professor Sara Wilson for help with the equations carved into the two corpses – two corpses rotting in the morgue as they are low profile crimes to the MPD – the homeless are faceless. Cross, incensed with the brutality of the crimes, will not desist in finding the murderers, even while he and Siegel pursue the snipers who continue to kill Washington’s high rollers.

Sara defines the mutilations. One is called Riemann’s zeta function – an area of theoretical mathematics. Zeta, the core of Riemann’s hypothesis, is the holy grail of mathematics today, and a million dollars has been offered for the proof of the hypothesis. The other numerical carvings are Mersenne forty two and forty three – 2 of the biggest known prime numbers. Sara explains that Riemann had a nervous breakdown trying to define infinity through primes, and John Nash (A Beautiful Mind) was obsessed by the theory. The murders ramp up. The parsing of murder, mathematics, mutilation and a genius killer pitches the plot into a convoluted stratosphere, as we dodge the bullets and watch each situation shatter and sheer like shards of glass.
The novel slams into overdrive as the three deadly situations run over the curb, riveting our attention on Alex Cross.

Concurrently, as Denny and Mitch, the sharpshooters, pull into D.C., they are stopped at a checkpoint. There has been another sniper attack, with a policeman dead. Denny proves ecstatic – someone is copying their sniper act!

When Craig kills Anjali Patel, and Nelson Tambour, FBI agents, he calls Alex – and the deadly game is on.

Coursing through veins like a snake’s venom, Patterson’s newest Alex Cross novel requires more than a tourniquet to stop the blood flow. Blasting, detonating, mesmerizing – Patterson’s plots gyrate like spinning planets, colliding and crashing against each other and with Craig and Cross in the middle. When Patterson collaborates, he’s genius. But writing on as the sole author, he passes by any other marksman on the crime novel scene. Pure Patterson. Pure-Not-Put-Downable!

is available for purchase at bookstores and Amazon.com.