You are here: Home / Fun / Books / Book Reviews & Giveaway: An Object of Beauty 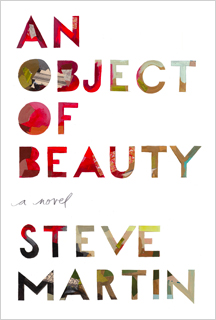 The New York – and occasionally international – world of art is never so successfully illuminated as by Steve Martin in his new novel, “Object of Beauty.” Narrated by character Daniel Chester French Franks, a once roll-in- the- hay friend and raconteur mesmerized by Lacey Yeager, the novel obfuscates the boundaries between Lacey and the sellers and collectors of art upon whom she preys. Brilliant in the telling of the volatile and eccentric world of Big Bang Art and the collectors and galleries that are part and parcel of the selling and collecting of same, Martin offers up Lacey as first, a dilettante dabbling at Sotheby’s mailroom and then, as a young upstart on the fast track. As Lacey steps from one escalator step to the next, she throws her Blahniks into the air and charms, outthinks, out manipulates and uses everything she can to not only learn her trade but press her womanly charms into every man she comes across. Only Daniel stays within the pivot of her blinding light, which tends to blur even Matisse at his best.


The allure of this novel shines through Martin’s knowledge and presentation of the 1990’s art scene, how every 7 years it booms, then goes into recession. The 22 pieces of artwork weaved in and out of the novel are magnificent, and become one with the obsession and craving for beauty, the object, that blinks through like a neon Warhol. Daniel never gets the goods on Lacey, because Lacey never gets the goods on herself. Flying by her pants through Sotheby’s and on to Tarry Barton, a very successful gallery owner, Lacey flouts tradition and proves whimsical, ethereal and empty all at the same time. Both calculating and rash, she rises to the pinnacle she has set for herself, steamrolling over anyone in her way.

Lacey, however, proves symbolic as a protagonist both innocent and debauched. She mirrors the world of art that she is embroiled in; instead of fully realizing Lacey a character in the novel, Martin allows her the same treatment as the art that she represents: sometimes lush and masterful, full of nuances of beauty; and often shallow and successful because of her name, and how she has marketed herself within the trade. This mirror-shadowing might cause the reader to feel that Lacey is one-dimensional; however, this is part of the genius that Martin displays as a seasoned writer. The one missing part, I found, was that irony becomes a trifle didactic as Martin sways and sashays into the novel with his own musings of The Isabella Gardner Museum theft, which really does not add to the plot except to inject a touch of conscience in Lacey’s character, which skews the focus. This is a vampirette: she should have no conscience!

This novel stands on its own for the insider’s knowledge of art in America from the 1990’s on; Martin’s expertise is infallible. He snorts out questions of aesthetics, obsession and financial import and lets them fall as they will. Intense and fast paced, the novel passes through all phases of the collector through Lacey’s eyes: first, she just has a job, then she begins to appreciate some of the old art that she encounters; she learns everything she can to make a profit on her knowledge; then she acquires art herself, and in her own ambiguity, the novel trends toward reality. While Lacey is facile, easily beautiful and tempestuously sexual in her race toward owning her own gallery, she also presents the many sided realities of why people collect art, and pay huge sums for “masterpieces”, and the artists who produce them, who are sometimes created through collectors themselves. The subjectivity of art is addressed by Martin as a by product of Lacey’s dream. The novel attempts a multi-layered look at the drives and ambitions that art produces, and also the quirky characters that immerse themselves in that same acquisition and sale of art.


This novel has brilliant moments, and is thoroughly absorbing. Lacey is simply the structure through which Martin resonates, and as such she remains one dimensional. Franks, the narrator, simply introduces Lacey and watches as she sparks and plummets through the fanatical world of art in New York. Her eminence rises when she is sent to Russia on an “exchange” trip, and she uses this trip as her fulcrum.

Tantalizing and seductive, “Object of Beauty” defines ourselves and the culture we live in much more than it defines the characters it projects on its 304 pages.

An Object of Beauty: A Novel

is available for purchase at Amazon.com and retailers nationwide.