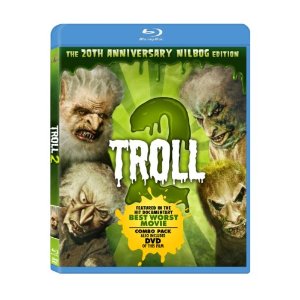 Is it really such a dubious honor to be called “best worst movie”ever?  No.  Because I really love moves that are so bad they are good (this is exactly why I have the movie Skyline set in my date book).  I
genuinely love hilarious campy films that are not what they are intended to be.  Troll 2 really delivers on the laughs and camp. I would rather watch a movie that is “so bad its good,” than a run of the mill horror flick. While I do not think that Troll 2 is the worst movie ever made, I do however think that it is genuinely pure fun even though it is completely unintentional.

We: Grandpa Waits,—the cheapest Orson Welles double money may well buy, in fact—is telling a ghastly bedtime yarn to Joshua. The story ends and it turns out Grandpa Waits has been dead for six months. Later, the Waits family sets off on a vacation to Nilbog—”It’s GOBLIN backwards!” Joshua cautions the family. In Nilbog they plan to house-swap with some locals and spend a month “as peasants and farmers, just like people did a century ago.” (in the father’s words).  Like all movie dads, he’s psyched about this holiday. The
goblin family they trade houses with left them a spread of green food that will plump up the Waits family for eating.  Mysteriously, Grandpa (the specter) freezes time so Josh can save the day. But,  how can he stop his hungry family from eating?  He stands on a chair, unzips his fly and— thankfully the cameras cuts away before we see it — as he pisses all over the food… “YOU CAN’T PISS ON HOSPITALITY,” Josh’s father yells.

This is only the beginning of the insanity of this film.

You must do me a favor and YouTube quotes from the film because they are completely priceless.  If you think that this is funny please do yourself a favor and purchase the film right now.  Why? Because it’s sheer outrageousness.  By the end of the film we have rocks from Stonehenge, an RV filled with popcorn, and the “Oh my God” YouTube sensation.  There really isn’t a dull moment here. Every phase of the
film creates a kind of comedic snowball result—the HAHAs get bigger as the plot grows more and more illogical. That is, until Joshua saves the day with a double-decker bologna sandwich.

Dear MGM this film really needs a respectable amount of special features.  This edition has none, booo.   Please. we need another edition with more.  The transfer looks as good as it could as well as the sound.

Is this my favorite unintentionally terrible movie? No.  That goes to Avatar or Gran Torino.  Yes I said it.  I will defend this fact forever.  Now please pick up a copy of Troll 2 right now then get some weed (this movie only works when you’re high, because the entire crew must have been to make this), pretend you’re at the drive in and then laugh.