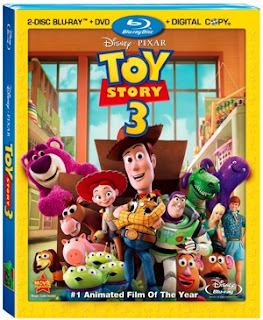 As you may know from my previous reviews I am a big fan of the Toy Story films.  As with any Pixar film the viewer (I mean Adult Viewer) goes in with a certain amount of expectations.  The viewer should expect a film they can watch with their children and enjoy on multiple levels.  Upon walking into Toy Story 3 I was scared.  I was scared of a sequel that was made a decade later.  But fifteen years now, Pixar has taken my inner youngster on animated escapades I never fantasized imaginable; journeys of exciting imagine supplied with masterful, at-times moving storytelling, requisite characters, beautiful worlds, revolutionary animation and delightful giggles primed and refined for kids and adults.  I am not saying that Toy Story 3 met my expectations…it exceeded them.

Ten years have passed for Buzz and Woody.  Cast-off in a dusty closet, the devoted two chief a small remainder of remaining toys. Andy now an adult no longer plays with them.  But once toys come out of the bin, trouble is never far behind. Andy organizes to leave for college, and his mother mistakes a bag full of toys for garbage. Woody, having seen the bag switch transpire, urgently tries to explain the situation to the other toys, but they refuse to listen. They then hop in a donation box bound for Sunnyside Daycare Center, a interesting world where they’ll be played with every day. Woody is convinced they all belong with Andy, even if it means sitting in a box in an attic.

Inopportunely, Sunnyside quickly devolves into a nightmare. The daycare center is ruled by a gang of toys many of whom have little concern for the safety and well-being of their latest beginners. After resetting Buzz and tricking him into joining their gang, Lotso and his henchmen force them to the pre-kindergarten room (children with no regard).  Andy’s toys decline to go down without a fight and soon start inventing an escape plan.  This is all I am willing to explain and all goes down in the first 20 minutes or so.  I refuse to spoil
anything in the film.

I can not sing enough praise for this film.  I would go on to say that this may be the greatest animated film of all time.  Form the visuals to the audio to the storytelling this film is a complete A+.

Cine- Explore Picture-in-Picture Commentary: Director Lee Unkrich and producer Darla K. Anderson are givein their chance to talk about the film. Pixar junkies should set aside time to watch.

Beyond the Toybox: An Alternative Commentary Track: If you only have time for one commentary, go with Unkrich and Anderson’s track.

And Day & Night — a wordless delight brimming with movement and music — is no different.

Overall:
This film gets my highest recommendation 5 toys out of 5.