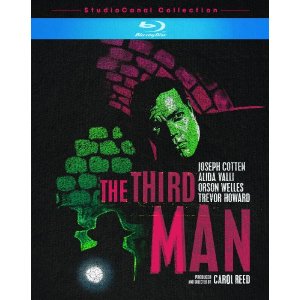 After all it’s not that awful. Like the fella says, in Italy for 30 years under the Borgias they had warfare, terror, murder, and bloodshed, but they produced Michelangelo, Leonardo da Vinci, and the Renaissance. In Switzerland they had brotherly love – they had 500 years of democracy and peace, and what did that produce? The cuckoo clock.

This is an impossible review. It may just have to be a series of praises because “The Thrid Man” is without question one of the greatest films ever made. There is nothing not to like about this film, it is every bit as amazing as Citizen Kane, Maltese Falcon, or Gone with the Wind. The film is a serious precursor to almost
everything that came out after it. This is a film I pull from the collection ever few months for a watch (I now have two different editions of the Blu-Ray). If you do not own this film please buy it now.  This is a film for everyone. I don’t know anyone that does not enjoy this film. It is everything romantic, comedic, intense, and action packed. This film is everything my film school education tells me a movie should be.

The basic plot of the film is: Holly Martins goes to post war Vienna to see Harry Lime (an old friend) about some work. But when he arrives Martins is shocked to hear that Harry was hit by a car the previous day. Holly begins to ask questions about the death of his friend Harry and gets a variety of results. This sends Holly on a quest for the truth. But what kind of truths is a pulp novelist going to find in post war Vienna?

I really love the mystery of this film. It just keeps pealing back layer after layer the mystery gets deeper and deeper (sometimes quite literally, the sewer chase is fantastic). Also this is an amazing look at Europe post WWII. A lot of the film is concerned with the culture clash for Holly. This really gives an American feel to the
film.

The film is photographed amazingly as well as the transfer. And the score is absolutely fantastic. The theme song on the zither is an uneasy but fitting and sets the stage perfectly. While this blu-ray transfer in not absolutely fantastic it is still better than any other DVD release of the film. The print used on this does seem a bit damaged. And I’m surprised that the audio track is not the original mono track.

This film is on the short list of the greatest films ever made.

is available at Amazon.com & other DVD retailers.

Overall:  I am obligated to give it 6 stars out of 5. I am maintaining the Hollywood system of stars on this film.
Review by Bro’ “B” – Ben