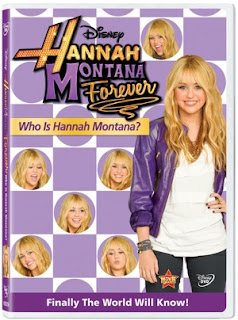 The dichotomy of Hannah Montana continues – but not forever – as Miley Stewart rues her double life as Miley – Normal Girl – versus her a.k.a., World Famous Rock Star, Hannah Montana.

This series however, is about more than a blond wig, or comedy or funny plots.  Disney’s magic unfolds in the themes that make Disney a powerful and magical component of our cultural mores today, and Disney’s themes always make a point.  Miley Stewart, Robby, Jackson, Lilly represents a family that cares deeply about each other, and yet allows the space that families require to grow and thrive.  Miley’s dad, Robby, played by Billy Ray Cyrus, is laid back and staid, making sure that Miley gets the help she needs without becoming an overbearing or controlling dad.  Jackson, Miley’s older brother, is also close to Miley.  Miley’s BFF, Lilly Truscott (Emily Osment) knows her secret, along with the rest of the family (Lilly lives with them) and can be trusted to keep it.  Lilly wears a purple wig to Hannah concerts and calls herself Lola.  It is in the trust and camaraderie of this series and the characters within it that Disney shines.  They are funny, caring, yet ambitious people, and yet hold onto their need to be entirely who they are:  and Miley/Hannah represents the push pull that we all feel between career, fame, fortune and maintaining our own integrity within the unit of friends and family.  Miley’s dilemma is our dilemma and touches us as this teenage girl tries to find the truth within her two parts.

Jesse, rock-bander guitarist and Jake, TV star, vie for Miley’s heart.  The true genius in this DVD is in the vaudeville-slapstick humor that flows from Lilly to Miley, and from Miley to Robby, and right onto the viewer’s lap.  Miley Cyrus doesn’t miss a beat – or a laugh – with caustic one-liners, shtick plots, over the top “situations” and the on again off again dilemma of Hannah/Miley.  Although the boys (Jackson played by Jason Earles), Oliver (played by Mitchell Musso) and Rico (played by Moises Arias) are often out of control, and don’t contribute much to the dynamic comedy of the DVD, the scenes where Miley, Lilly and Robby bob and toss are full of comic tempo and genius.  Cyrus can act as well as belt out a hot song – and I do believe she is one of the most talented young singers around today.  Without the Britney angst, the 8 episodes are sheer Disney – comedy at its best, brilliant delivery, interlaced with Disney magic.  One of the best sitcoms out there for tweens and tweeners, the show is enjoyable and fun.

Does Miley decide to heave the blonde wig in the Big Tent?  Join the circus, and find out!

Ashley Tisdale’s upcoming movie Sharpay’s Fabulous Adventure – Sneak Peek
Sharpay (played by Ashley Tisdale) has just graduated high school and sets out for the Big Apple to be on Broadway.  When her dog BOY is asked to be in a Broadway musical, Sharpay goes out and buys more pink outfits.  Sharpay is all about pink – and rhinestones.  Her love interest is a film student.  With singing and lots of pink outfits, this Paris Hilton lookalike shines as she sings and cavorts her way across the Broadway stage.

Dylan and Cole Sprouse – talking about Blu-Ray and Disney (yawn)

Learn How to Take Your Favorite Movies on the Go – every Special Edition on Disney movies has a Disney File Digital Copy so that you can play it in your laptop or other electronic device and enjoy Disney on the move.

We received a product for our toy review. All opinions are our own.