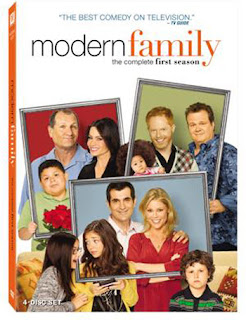 This is the second greatest new show of the year, right behind Glee (see previous post). This is a show that I should not enjoy what so ever. It is everything I applauded Glee for not being, a stereotypical sitcom. That being said this is my future wife’s favorite program of the year. Watching this show I got to thinking about the nature of sitcoms through the decades and how family is personified through this. We have Leave it to Beaver in the 50s to show us the typical American family. The 1960s ushered in the Brady Bunch a less typical family system and all that innuendo. Then in the 70s we had All in the Family which addressed American’s change in social status and values. We became even more diverse in the 80s with The Cosby Show and its representations of the African American family. More recently we had explored the family business and upper middle class America with Arrested Development. Is Modern Family the show to carry the torch this decade? Yes. Modern Family is a barometer for current American living, complicated yet traditional. 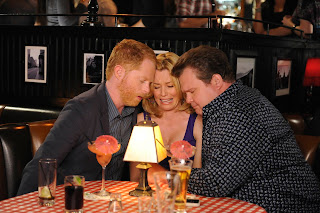 Usually I would feel insulted buy a program like this but I don’t. This is the next evolution in the family sitcom. It falls in the same holes most other sitcoms do, such as the father who acts like a child, the mother who has to do everything, and the teenager who resents them for being so embarrassing. Sounds hokey, I know, but it just works.

In the first episode, stay-at- home mom Claire tries to find time on the overcrowded family schedule for her husband Phil to shoot their young son Luke with a BB gun. Because Phil made a deal with Luke—he’d buy him the gun, but if Luke shot one of his sisters, he’d get shot in return. Phil can’t go through with it, but he ends up shooting just about everyone, accidentally, including himself. He’s the show’s greatest character, a father who attempt frantically to seem cool but who only ends up discomforting his wife and kids. This is just one third of the episode there are two other family relationships to consider. Claire’s father Jay has recently married a woman half his age, a Columbian beauty named Gloria. Their kid, Manny (Jay’s stepchild, and Gloria’s son), acts more like an older gentleman, very out of tough with kids his age. Clare’s brother Mitchell and his partner, Cam, have recently adopted a girl from Vietnam. This show plays on the modern American father mostly. Phil is a completely embarrassing (almost Homer Simpson like, except for the alcoholism), Jay is very old and plays it up with that old school tough father, and Mitchell a gay lawyer trying to get a grip on family life.

Unfortunately, the blu-ray is lacking on special features. The ones included on the disc are kind of bland except for the one about Fizbo. The video quality is excellent as well as the audio quality.


This show will be sticking around for years to come because of its writing. The show uses sitcom clichés and changes them to fit their needs by using edgy humor and modern social issues to make the
audience feel comfortable. While to me this show is not nearly as relevant as Arrested Development I believe that this show is destined to be the next breakout sitcom.

can be purchased through Amazon.com or at DVD retailers nationwide.