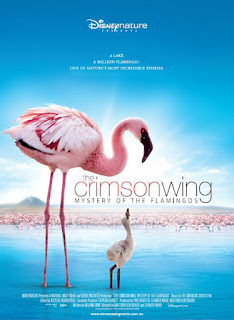 Set in Africa’s magnificent Lake Natron, this achingly beautiful area creates an arena for the flamingo, one of the most interesting birds in all of nature.  The area also reveals the panorama and natural environment of other creatures native to the area.  This film depicts the circle of life that surrounds the flamingo migration to and from Lake Natron.  We follow the adventures of one single chick, from hatching to the hatching of her own chick, and we fall deeply in love.  While the film has its lighter moments such as the humorous courtship rituals and the first attempts at flight by our young chick, there are also scenes of danger.  The attacks by predatory birds may be a bit disturbing to very young children.  The race of the hyena across the running flight of the flamingo provided dramatic moments.  I found this film both heartwarming and heartbreaking, simultaneously.  Even though the film is meant to be educational, it has a “fairytale” feel from the first words of “Once Upon a Time in Africa…”

The cinematography of the DVD is spectacular.  I usually do other things while watching a movie, but found I couldn’t take my eyes off of this film.  The scientific and educational facts were presented in such a dramatic and flourishing manner that I felt like I was listening to a story, rather than learning.  The gentle voice of the narrator created its own flow in the film’s narration.  All in all, I thoroughly enjoyed this film.  Especially since I finally learned the answer to “Why are flamingos pink?”  Want to know?  Watch the film!

The DVD has bonus features including The Flamingo Diary:   “Life at the Camp” and “Making Of”, which were my favorites.  These features display more background information about the film and the environment.  I highly suggest that you watch these also, as they provided a framework for the DVD that fit beautifully around the circular format of the flamingo life span.

is available for purhase at Amazon.com