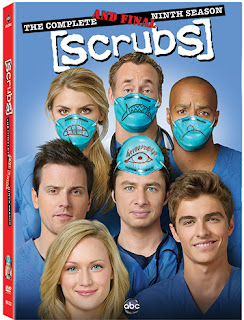 Scrubs is an American icon, along with The Simpsons and Seinfeld. I, however, am un-American. I am sure that I am at the top of the dossier of the FBI’s Most Wanted Watches TV NOT list. I throw my handcuffed hand up – it’s true! I had never before seen Scrubs, so its hilarity and touchability had me from Episode One, Season Nine. I am a geek book reviewer. I seldom turn on the TV, and 60 Minutes does not mean much more to me than a dinner that I’ve got set on the timer!

That said, I sat, awed and thoroughly entertained through Scrubs Season Nine. Although this DVD did not present the usual “What has happened in the last nine seasons and what you should know about the characters” I did not encounter any problems following the hysterically funny and talented group that Scrubs presents.

Enter Winston University campus, Sacred Heart Hospital, a training med school. The new characters come as both students and doctors to join the Scrubs staff in learning how to become doctors. The emphasis is on the doctors, although the patients pop up every once in a while, and I liked this perspective. Returning members of the original cast, Zach Braff (JD – Dr. John Dorian), and Sarah Chalke (Dr. Elliot Reid), John McGinley (Dr. Perry Cox) and Donald Faison (Dr. Christopher Turk) serve as unusual teachers for the talented cast of new students, and Dr. Denise Mahoney (Eliza Coupe) joins the cast from Season Eight as student advisor.

And the action takes off! The new med students are a motley set: Lucy (Kerry Bishe), an emotional bleeding heart and do-gooder, Cole (Dave Franco), a rapper-like, protected son of the hospital’s biggest donor and total jerk, and Drew (Michael Mosley), oh so manly with a huge chip on his shoulder, know it all. Throw in Chang, the brainiac and Australian Blonde Bombshell and you have the cast of students. In perfect order, they pair up like dice: Lucy and Cole, Drew and Dr. Denise and Chang and Australian BB. Their personal interactions and “study group” catastrophes drive the 13 episodes of Season Nine.

JD and Ellie, married and pregnant, along with Turk, provoking and bonding with BFF JD, prove irresistible. When Turk and JD body bump, I could only think of Cougar Town. Throw in security guards Capt. Melvis Duncook and Lt. Frank Underhill begging their golf cart to forgive them, and you have slapstick at its best.

Dr. Cox and Denise Mahoney assert themselves in vile and often over-the-top nasty, scummy ways that create the comic tension that drives Scrubs madcap adventures. Add Dr. Kelso, former Chief of Medicine, and his elderly bimbo-itis, and it’s all there, folks.

Interspersed with hilarious scenes are also poignant ones: Kelso giving heartfelt advice; Drew telling Denise he loves her, Perry Cox asking JD to be his confidante – for 5 minutes.

The list goes on and on. What makes Scrubs one of the funniest TV series in the last nine years is its zaniness and complete lack of regard for rules!

Scrubbing In – Dr. D hands over Scrubs to Lucy. Bill Lawrence and Saran Chalke talk about the show. The new cast is young and sexy, and Zach, the series narrator, notes the fresh and funny new actors as “Muppet babies,” one of the best lines of the series. The new actors and actresses comment on their experiences as members of the cast.
Deleted Scenes: Bill Lawrence commentary
Our First Day of School – welcome back five, lights camera teach, in-security (this is a not to miss segment where the guards diss a not so cute student), I am not great with needles – many of these scenes are a delight and Lawrence says they were only cut to keep the episodes shorter – well worth watching
Bloopers: All of the crew enjoy their scrubbed scenes of enjoyable and funny mistakes


Live from the Golf Cart – Our fav security guards allow Dr. Todd Quinten to join them On the Cart, discuss his self published book and pop champagne

is available for purchase on Amazon.com and other DVD retailers

Thank you to Walt Disney Home Entertainment for providing a copy for our DVD review. All opinions are strictly our own.