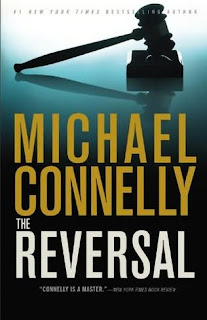 Michael Connelly’s The Reversal destroys all illusions about the justice of our legal system. This thriller, like a steak on a hot grill, (black and blue, please) sears through pages in a conflagration that smokes and sizzles to the end.

Defense Attorney Mickey Haller is recruited by his arch enemy, slick and quick Gabriel Williams, Los Angeles D.A. to re-try a convicted killer, Jesse Jessup. The Supreme Court has released Jessup after Jessup has spent 24 years in San Quentin. Gabriel Williams, all sleaze and political aspiration, is the District Attorney on the fast pace to stardom. The case file recounts the murder of 11 year old Melissa Landy, whom Jessup strangled 24 years earlier. For some reason he cannot fathom, Prosecutor Haller turns sides to retry Jessup for the Defense. Jessup’s case will be retried due to a new discovery of the DNA sample of semen on the murdered child’s dress – the semen is her fathers, not Jessup’s. Since Jessup was convicted on this evidence, and the evidence has vindicated him, he goes free. But is he still the killer? Melissa’s 12 year old sister Sarah, who personally witnessed Jessup abduct her sister, has gone missing.

As his prosecutive team, Haller chooses his ex-wife, prosecutor Maggie McPherson and LAPD detective Harry Bosch as investigator. This novel’s fire never extinguishes. The flames peak as we enter the lives of Mickey, Maggie, Harry and their daughters. Every page jumps over the fire bumps, one after another.

As the trial date sets, Clive Royce, the flamboyant and arrogant defense attorney for Jessup slams clever move after clever move into the prosecution team’s face. Haller, McPherson and Bosch HAVE to find Sarah, their only witness, in order to have any case at all. The courtroom detail and procedure rivets. Judge Brietman demands control in a courtroom that sizzles and rages with intrigue and emotion. One of Connelly’s best – but then, every book is Connelly’s best. And for all of us out there who are addicted to Detective Harry Bosch – well, we get our fix! Ingenuous, faster paced than a Ferrari in a speed trap, this novel drives to Connelly’s usual explosive ending, without popping the clutch. Read it. Read it now!

is available for purchase on Amazon.com as well as your local bookstore.

Ratings are based on a 5-star scale
Overall: 4.5