You are here: Home / Fun / DVD Reviews: The Simpsons: The 13th Season 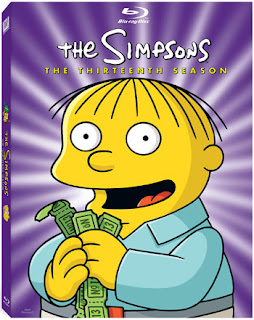 I find that every day more and more I find myself looking a little more like Homer Simpson. I did not dawn upon me until recently. I am quickly balding while my waist line is expanding. So, as I write this I am paranoid that I am becoming human incarnate of Homer Simpson.

Some may call then number 13 unlucky but in terms of this season 13 is a very lucky number. This is my absolutely favorite season of the Simpsons. I really love this season’s outlandish nature. Many critics of the show say that this season is were it lost had its edge, but this is where I find the most memorable episodes. Including my absolute favorite episode “Jaws Wired Shut.”


Jaws Wired Shut includes all of the usual inane storytelling that an episode may have but it learned a thing or two from the entrance of South Park. Because before this there were two types of episodes the Homer episode (irreverent and does not really rely on storytelling) and Lisa episodes (Heavily rely on relatable situations and storytelling). This season/episode really blended the two very well.

This episode depicts Homer getting his jaw wired shut and becoming a good listener. This is at first helpful to Marge but becomes an annoyance that no one is doing anything crazy. This forces her to enter the demo derby, thus forcing Homer to get drunk as well as feed some drinks to a donkey to save her.

There are commentaries on 22 of the episode, which is too many for most people to watch. HOWEVER –  Stan Lee appears on one track that was exceptional.

*** Now for the longest list of special features ever:

is available for purchase at Amazon.com and other fine DVD retailers.

Overall: 4.5 unruely donkeys out of 5. (because of the Lisa episodes).