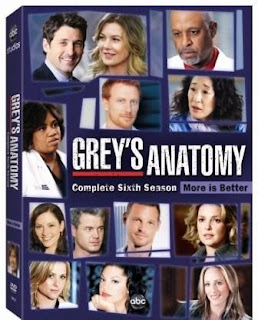 Three sleepless nights.  Grouch Bunny at work.  Addict, junking on Grey’s Anatomy.  I transformed into a mesmerized, adoring fan (I had never seen any episodes of this series before).  Need GAA (Grey’s Anatomy Anonymous).

Seattle Grace Hospital merges with Mercy West Hospital, sending the Seattle surgeons and residents into a feeding frenzy, fighting over surgeries and trying desperately to keep their jobs as Richard Webber’s Chief Surgeon position teeters on the brink of the merger.

As the series opens, George O’Malley (T.R. Knight) dies in the operating room after he has thrown himself in front of a bus to save a woman he doesn’t know.  The hospital reels.

Meredith Grey (Ellen Pompeo) and Derek Shepherd (Patrick Dempsey) have a Post-It Note Wedding.  Izzie Stevens (Katherine Heigl) seems to be winning her battle with cancer but Izzie dissolves emotionally when Richard fires her.  She leaves Alex Karev (Justin Chambers), her new husband.  Alex shows interest in Reed, a new resident from Mercy West.  Dr. Miranda Bailey (Chandra Wilson) pursues a divorce, finally tells her dad, and finds a new love interest, Dr. Ben Warren (Jason George).  Cristina Yang (Sandra Oh) fights to have an attending cardiologist who can teach her and when Dr. Owen Hunt brings in Teddy Altman (Kim Raver), a cardiothoracic surgeon from his past, Cristina realizes that she might lose Owen’s love – but she craves Teddy’s knowledge.  Owen Hunt (Kevin McKidd) fights his nightmares from Iraq, realizes that he loves both Teddy and Cristina, and has to choose.  Callie Torres (Sara Ramirez) and Arizona Robbins (Jessica Capshaw) fall deeply in love in their lesbian relationship, throwing Callie’s father into a frenzy.  They argue over having children as a couple.  Mark Sloan (Eric Dane) becomes a man – and a father – when his previously unknown 18 year old daughter shows up at his door pregnant.  Lexie Grey (Chyler Leigh), Mark’s live in lover, panics and leaves Mark for Alex.  And the man holding the merger in his hand, Richard Webber (James Pickens, Jr.) loses it between the stress of holding his hospital together, firing Izzie, trying to fire Derek, until he relives his own humility when he almost kills a patient by cutting a bile duct.  A recovered alcoholic, Richard begins drinking again.  Meredith, being mentored by Richard, is torn between Richard and Derek.  And all the members on staff reel from George O’Malley’s death, each striking out in a different way to express their shock and grief. 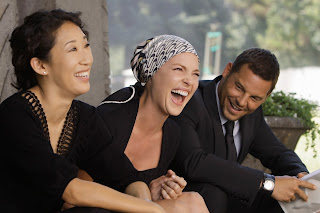 There’s lots more in between, but the finale tops the agenda.  When a man’s wife (Mr. Clark) dies on the operating table, he turns maverick gunman and roams through the hospital, shooting anyone he thinks is a surgeon, seeking to kill Derek and Lexie.  As he goes on a killing rampage, the hospital goes into lock-down.  Reed dies.  Clark then shoots Derek in the chest, after wounding Alex.  There is more.


Winner of three Emmy Awards and 2 Golden Globe Awards, all I have to say is I don’t care if Grey’s Anatomy is over dramatic.  I don’t care if it is unrealistic.  I don’t care if there is too much sex, too much death, too much life.  The Greeks summoned tragedy in order to prove a catharsis of emotion, to allow people to experience their innermost thoughts and feelings.  Grey’s Anatomy does just that.  The chemistry of the staff members of Grey’s Anatomy roars, and their performances are talented and intense.  The plots evolve and spin – love, hate, lust, fear, sadness, grief, loneliness, joy – emotional charisma is a trademark of the series and compelled me to view episode after episode.  Great show, great writing, brilliant performances from a very talented staff of actors and actresses – and so darn addictive! 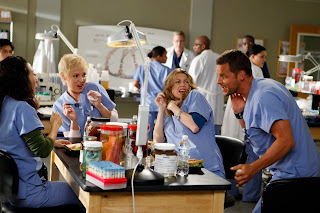 Oops, I have to go to my GAA meeting!  See you at Season 7!  (And yes, you caught me crying while watching the final episode).

This extra 20 minutes of horror and pandemonium at the Hospital proved even better than the final episode.  Dr. Bailey and her patient, Mary, try to save Charlie’s life, but they can’t get to an OR and he dies – but not alone.  Chandra Wilson’s portrayal of Bailey should get another Emmy or two.  The rest of the cast pick up the pieces.  Teddy and Owen make peace, Owen chooses Yank and Mr. Clark terrorizes the hospital until Richard Webber takes him down with sheer courage and emotional power.  These 20 minutes is NOT TO BE MISSED.  Usually I go, yeah, have to review the Features – this feature proved better than the last episode!

Unfortunately, for some reason I cannot fathom, I could not pull up the other features.  I found that when I went to the last disk and tried to find “Special Features” that only the Extended Ending showed up and I kept trying to pull up the rest (I’m an ADDICT!) but I couldn’t.  My apologies fans, but I am sure that you will be able to find the Special Feature section, and that it will not disappoint.  One of the best – can’t wait for next season!

Review by Broad A – Ava

Thank you to WDSHE for providing a copy for our DVD review. All opinions expressed are strictly our own.