You are here: Home / Fun / DVD Reviews: Goosebumps: The Blob That Ate Everyone 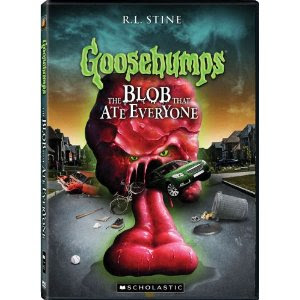 OK, you got the title; just follow the yellow brick road.  Zach Beaucamp writes.  He wants to be a writer.  But when the entire town succumbs to his writing on a found typewriter, strange events occur.  He also has a pen given to him by an old woman.  HMMMM.  Instead of writer’s cramp, we get writer’s ICK – the writing that Zach does comes to fruition.  Scary, scarier, scariest!  When we get to the Blob, who has a tremendous appetite and seems to like to eat everything, Zach races home to redo a version of his story that will save him. Bye bye typewriter and pen – they go down the stomach of the Blob!  In reality, Zach has gotten an electric shock while in a store and it turns out that it has affected his imagination.  The ending is funny – two little Blobbles are really telling the story.  They are the real manipulators of the story!


P.S.  This Blob, like Paris Hilton, is very chic however, appearing in pink and slimy as WORMS!

Larry’s day is off.  Sniffles from allergies, bad band sounds and dogs running after him are only the start.  Then he starts growing hair – lots of hair – all over his body.  It’s the Instant Tan he applied earlier – it must be!  And where is everyone – he can’t find his friends.

Piano Lessons Can Be Murder

Piano, piano where is the piano?  Well, Jerry knows.  It’s in the basement of the new house that he lives in.  He figures he might as well take lessons when his parents offer to pay for them.  Dr. Shreek, the new piano teacher, has a lesson plan that terrifies!  Jerry starts having nightmares, and they are ghostly ghouly at best.  What is Dr. Shreek hiding?  When Jerry finds it, all of it comes to…..the end!

is available for purchase at Amazon.com for under $15 and at DVD sellers nationwide.


Thank you to Twentieth Century Fox Home Entertainment for providing a copy for this DVD review. All opinions are strictly those of the broads.