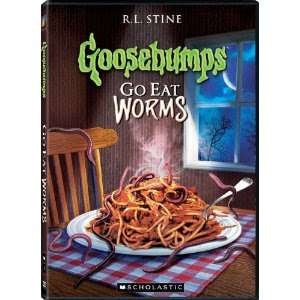 Go Eat Worms: Todd and his sister Reggie have science fair projects and as siblings, they are competitive.  Todd wrecks Reggie’s Giant Robin model for the project, and suddenly everything goes askew.  Worms are cropping up everywhere:  in Todd’s spaghetti, in his bed – and when he goes out at night to get more worms, he falls into a cavernous hole and is attacked by The Giant Worm.  All I can say, is thank goodness he has a flashlight.  Supposedly fanciful and scary, I found the 20 minutes segment silly and short.  BUT my grandson Milo laughed his head off and loved it!  Who am I but the silly Grandma?

The second in the series is called Bad Hare Day.  Tim is a kid who loves a good magic trick.  He thinks of being on the stage as a Great Magician someday.  His idol is a magician named Amaz-O and Tim goes to see his show.  Disappointed, Tim makes the bad decision to steal the magician’s tricks.  Little does he know how he will suffer for this – for Mr. Angry Rabbit has his own agenda!

Again, 20 minutes of yawn, AND Milo loved it!

Revenge of the Lawn Gnomes

Ever driven through Florida and seen the Plastic Alligators and stalky legged flamingoes?  Well, Joe’s Dad is a living Florida memorial to bad lawn stuff.  He has a yard adorned with Silly Things:  angels, skunks, and a plethora of plastic crap.  Suddenly he brings home two gnomes for the yard, all dressed up like Halloweeny goblins and looking like witchy gnomies.  When Joe hears sound in the yard at night —- well you can go from here.  Again, silly AND so boyo but Milo loved the series.

is available for purchase at Amazon.com for under $15 and at your local DVD reseller.


Ratings are based on a 5-star scale
Overall: 2 (for the adults) and 4 (for the kiddos)

Thank you to Twentieth Century Fox Home Entertainment for providing a copy for this DVD review. All opinions are strictly those of the broads.