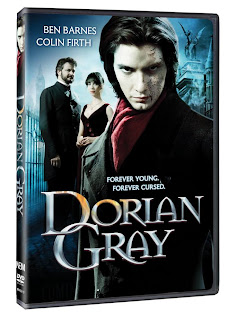 This film was released in the final days of my tenure working for a national movie rental chain.  While I have read the Oscar Wilde novella in high school, I did not realize that others had not.  My first customer asked me “What the F*ck is Dorian Gray” I stared for a moment then walked away.  He proceeded to ask if the film is in “American language,” I then suffered a stroke and realized my change of occupation was long overdue.  Just kidding about the stroke thing, it was a minor embolism and blood shot out of my eyes.  I agreed to do this review with no prior knowledge of the film and still in love with Colin Firth’s performance in A Single Man.

If I remember correctly, Oscar Wilde was one crazy son of a bitch (a.k.a. one of the literary worlds’s most emotionally conflicted writers). In Dorian Gray, we are essentially invited into a world where Dorian pledges his soul to always stay as he has been portrayed in a painting by Hallward. This allegorical deal with the devil plays out, with, of course, the painting itself taking on the beatings of Dorian’s shocking fate, a fate channeled by the self-indulgent tendencies of his mentor, Lord Henry.  These characters are obvious portions of Oscar’s psyche.

The acting is okay; I really think that Ben Barnes was not the right actor for the role, but over the course of the film he actually proved me wrong.  While the performance was not great it was solid.  My biggest problem with the acting was in them using Colin Firth.  I think that this is all me because probably he did a fairly decent job, but I just can’t see him in anything but a romantic film. He is simply better as the loveable sap. The director did a fantastic job setting up Victoran London.  The visuals really matched the tone of the film.  Although there were some problems with the digital transfer with some of the CGI (some of this looked like crap), but all of the live work is absolutely fantastic. I do feel that the director went a bit too far with some of the sexy scenes because we got it.  The first two acts were really tremendous but the final kind of fell apart it seemed a bit too far pushed.

Blooper Reel: Ran too long it was no longer funny after three minutes.

All and all a solid film good but not great.

is available for purchase on Amazon.com and other DVD retailers nationwide.

Ratings are based on a 5-star scale
Overall: 3 torn pictures out of 5

We received a screener in order to do this DVD review, but were in no way compensated. All opinions are strictly our own.