You are here: Home / Fun / Books / Book Reviews: The Thousand 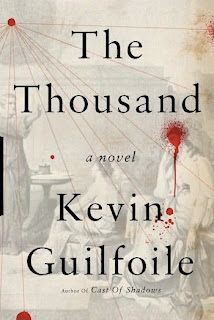 If you think Dan Brown’s The Da Vinci Code and Angels and Demons engage the mind, and allure the reader into a world of cult and code, then you will LOVE The Thousand, which creates a mind-maelstrom.  Not only brilliantly written, and tantalizingly conceptual, Kevin Guilfoile’s The Thousand anticipates religion, mathematics, philosophy, music and numerology.  I ripped into the first page and tripped onward; this ride combines talent, intricate research, and an incredible story line from ancient Pythagoras to current day reality – or lack thereof.  A more than fascinating novel, The Thousand creates an intelligent tableau that recreates itself on every page.  The Thousand IS its own reality within the portals that it opens in the mind.

Canada Gold, the pivotal protagonist in The Thousand, gambles.  And wins.  A child of severe ADD, she has a neurotransmitter implant that creates special abilities when it comes to numbers and reading people.  She will need all of these abilities to stay alive.  Her friend, Wayne Jennings, allows her to play at The Colossus, the casino where he works as head of security.  His boss, Peter Rhodes, a member of a secret Pythagorean cult named The Thousand, must find Canada when she goes missing from Jennings’ radar.  Canada’s father, also a member of the cult and a brilliant musician, was murdered because he completed his version of Mozart’s Requiem.  Music and numbers are the Universe within the world of The Thousand.  They are harmonia, the One.

As Canada thrusts and weaves in and out of strange places, she carries her friends into danger.  Her ex-boyfriend David Amoyo is murdered.  Her best friend Bea, the LA DA’s assistant and her husband are found dead and mutilated.  Wayne finds himself on the run as he is framed for Amoyo’s murder.  The cast of characters dives and resurfaces like buoys within and without the arena that The Thousand concoct to get their hands on the Requiem.  Dr. Falcone, who first implanted ADD patients with neurotransmitters and was thrown off the board as a doctor, is murdered.  She has ties to The Thousand and Bobby Kloska, a cop on the case, finds himself at a mansion in the company of Canada’s mother Elizabeth Gold and Grey Jameson.  Kloska doesn’t understand all the intricacies, but he knows that Canada is in grave danger.  He is trying to save Canada from the fate of her father, but he can’t figure out the connections].  Solomon Gold and his lover Erica were killed, Canada believes, by her mother.  Erica has a twin brother, Derek who seeks revenge on his sister’s death.

As Canada returns home to her mother, Elizabeth Gold, to prove that Burning Patrick, a local artist who creates magnificent tiles that have no ending is authentic, Solomon’s lawyer, Reggie Vallentine and his secretary Della remain holding their secrets, the only ones who know who killed Solomon.

As Canada starts to put the pieces together she is warned by Burning Patrick in tiles that he paints for her.  The entire novel incorporates sub plot within sub plot, and we cannot piece the pieces of the quilt together any better than Canada.

The resolution and ensuing truths are mind altering.  Kevin Guilfoile’s creation blends fantasy and reality so well that only Canada can figure out the twists and turns as she herself cannot envision who she should trust and who she should not.  Indeed, if she cannot find reality, she will self destruct.  Or be murdered.

The ending conflagrates into a contagion of thought and action, with smoke still rising in all directions as we sit, stunned, into silence.

Brilliant, The Thousand will remain a novel to contend with for a long time.

No surprise here though.  Alfred A. Knopf rarely publishes a book that is not astounding and breathtaking in its inner and outer workings.

Ratings are based on a 5-star scale
Overall: 5+
A must read for anyone who loves truth – and fears it!  As a writer’s reader, Kevin Guilfoile comets forward and spirals right at our feet!  Outstanding read


We received a copy of The Thousand for this book review. All opinions expressed our are own.