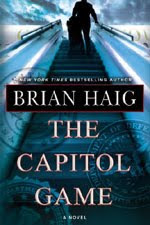 Author: Brian Haig
I last reviewed Brian Haig when I read “The Hunted” (see Book Reviews under the Review Broads).  I found his work an amazing read.
Back again with “The Capitol Game”, Mr. Haig does not disappoint.
Jack Wiley’s Doppelganger is Wiley Coyote.  A Wall Street banker, Jack discovers a small chemical company, Arvan Chemicals, holds the key to Wiley’s greed – Jack will be worth billions instead of just $25M if he can gain control of the company which is facing financial struggles.  Wiley incorporates the Capitol Group, a huge corporation with ears all the way to the President of the United States, in buying out Arvan.  Arvan goes under after the Capitol Group manipulates Globalbang into cancelling their chemical contract with Arvan.  Jack and his Capitol Group cohorts grab the company fast.
It seems that Arvan has a new polymer coating that is stronger than the equivalent of 30 inches of steel.  Embedded into the polymer are tiny beads of explosives that explode out, leaving the inside of any vehicle safe from attack by missiles, rockets or bombs.  With the wars in Iraq and Afghanistan, the Capitol Group is in the green, as they run the market on defense munitions and government contracts.  Get the polymer – and win the wars, marketing the US government for billions upon billions of contract monies to paint the polymer on their tanks and vehicles.  When the Pentagon’s Defense Criminal Investigative Service’s Mia Jensen swoops in, the whirlwind ride takes off, sputtering and spiraling, like a plane caught in wind sheer.  Jack’s partnership with the Capitol Group is iffy, also, and he pulls the gears up fast as his plane almost crashes.  The ending leaves us smiling – it’s just so BEAUTIFULLY justified!
Haig’s brilliance shimmers once again as a writer of spellbinding novels.  Crafted plots that simply recreate themselves over and over, the workings of this novel are as intricate as any I have read.  Sinister, controlled and masterly manipulated, Haig brings on the best maneuvers that I have read since Dan Brown.
Exorbitant characters, crafted espionage, brilliant innuendos within the plot, Haig emerges as one of the best novelists writing today – he mesmerizes and astounds with absolute clarity and ease of craft.  Take a seat.  It’s certainly a first class passage – and fly into the Haig maelstrom!
P.S.  Seat belts not required – too restrictive for the reading of this novel!
The Capitol Game

is available at Amazon.com and booksellers nationwide.
Ratings are based on a 5-Star Scale
Overall: 5
Review by Broad “A” – Ava
We received a copy of The Capitol Game for this book review, however all opinions are strictly our own and we were in no way compensated.
GIVEAWAY