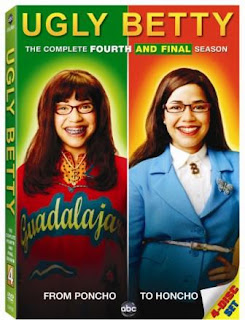 Since I reviewed last years Complete Season, when Broad Z offered me the fourth and final season of Ugly Betty, one of my very favorite ABC shows, I literally whooped and jumped up and down. America Ferrar (as Betty) creates the All-Woman as she saunters into Mode Magazine on a daily basis. Daniel Meade (Eric Mabius) shows us what a real boss can be; Ignacio (Tony Plana) exhibits fatherly wisdom. Hilda (Ana Ortiz) is the best sister a girl could have, and her son Justin (Mark Indelicato) proves that boys can obtain the clarity of a man from their families. Claire Meade (Judith Light) now only displays the elegance of the beautiful older woman, she shows Daniel that love is not diminished if it is shared. Amanda is our favorite SNAKE and Becki Newton proves hilarious in the role. Marc St. Clare (Michael Urie) works as evil Wilhelmina’s assistant and knows he is worthy of the features editors job – except for the flip of the coin. His character emerges from Amanda’s snarky co-partner is nastiness to become the person he really is – talented and generous. Matt Hartley (Daniel Eric Gold) as Betty’s son-of-owner-of- Meade-Magazine boyfriend, then ex-boyfriend-then boyfriend, then not boyfriend displays sensitivity and maturity as he flows through his roles in Betty’s life. And of course, then there is Wilhelmina Slater (Vanessa Williams, the most beautiful and talented actress going) who tries in every way possible to steal the spotlight and run Meade Magazine.

This season, the characters in Ugly Betty attain their maturity and reveal their essences. Betty assumes her new maturity and assertiveness by setting boundaries. Daniel accepts his grief over Molly’s death by letting go after a harrowing experience in vulnerability. Wilhelmina accepts and gives love., and nearly dies
(I’m not TELLING you all the plot – get the DVD!). And Marc shines, and becomes real. Claire finds someone she longs for who does not turn out to be who she thinks he might have been, and supports Daniel
and flies into her scenes like the passionate woman she portrays. The characters transcend their experiences, evolve into multi-dimensional characters with an array of talents and heart felt emotions, and flourish. And Daniel finds out what he has been seeking since episode one: what he really needs to be happy. Amanda and Marc move on into their potential, and of course, Wilhelmina becomes a truly full, instead of transparent character.


Why do we love Betty? Because she is authentic and honest, both with herself and others – and we all long to evolve into the Betty we carry inside.

I could go on and on, but Broad Z says I am taking up too much space!! All I can say is I was mesmerized as the sometimes silly Betty Suarez multiplies into a woman of power and self assuredness. I also love that all the characters reach that oh so elusive potential through Betty’s previously annoying and now wise intervention. ABC had a winner in this one. I will be oh so sad to say goodbye.


Betty Goes to the Bahamas – In the Bahamas, the cast of Ugly Betty swim with the dolphins, Daniel catches a spa treatment, Marc and Amanda skip around, Wilhelmina, Ignatio and Claire eat sushi at Nobi Restaurant and Freebie the Seal gives some good geo-graphics on the rest of the crew! Only one sleeping is Betty!


At the end of Special Features, the guys in the cast do the boogie down!~

is available for purchase on Amazon.com for under $26 or at your local DVD dealer for under $40.

Overall: 5 from Broad A (I know I have been giving everything a 5 but I have
also been the luckiest reviewer in the world this year! All the books
and products have been fantabulous (Was that a Betty moment????)


We received a copy of this DVD for our review, but were in no way compensated. All opinions are strictly our own.