You are here: Home / Fun / DVD Reviews: Brothers and Sisters:Season 4 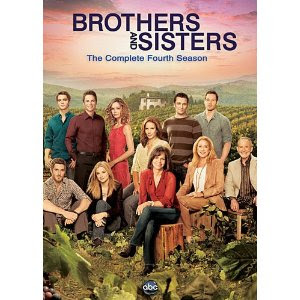 I had not seen Brothers & Sisters before, (does that make me un-American), so when I viewed all 24 episodes over a two day period, I experienced moments of compassion, moments of utter boredom with the trivialities that families entail, and moments of sorrow and joy with their accomplishments and tragedies.
Brothers & Sisters is not for everyone.  However, the star studded cast, the great performances of Nora Walker, family matriarch (Sally Fields) and her five adult children (Calista Flockhart as Kitty, Rob Lowe as Kitty’s husband Senator McAllister, Rachel Griffiths as Sara, Justin, Kevin and Tommy Walker) mesmerize at moments.  In this season, Sara falls in love.  Nora gets betrayed.  Kitty has cancer, then runs for office (not simultaneously!).  Justin and Rebecca lose their baby.  Tommy regains rights as a father to Elizabeth.  Scotty and Kevin seek to have a child.  Saul looks online for a relationship.  Robert gives us his Senate seat for Kitty to fill.  Ryan betrays the family.  Holly becomes part of the family, and David asks Holly to marry her.  That’s just for starters.  You can imagine things got a little dramatic at times. 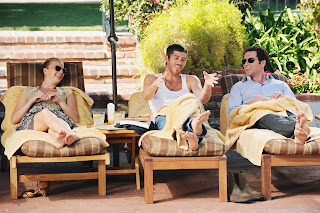 In the tragic ending, Robert dies, leaving us wondering if Kitty will die too in the next season.  The other characters are hurt and Saul puts in an emotional and touching performance as he yells at Justin not to touch him as Justin tries to help Saul.  But episode after episode we see a family grow and expand and face life together.  A dedicated series with lots going for it.  A bit trite and too melodramatic in places, it reminds me of Dynasty, with nice people instead of the tigers of South Fork Ranch.
Not a deal breaker for me, though.  Some episodes screamed “sappy” and some regurgitated “shtick.”  I loved that this show has the guts to show Scotty and Kevin as real people with real lives and feelings, and that some of the best scenes and the most real emotions are between this couple.  All in all a worthy series.
Special Features
All in all, Special Features put me to sleep
Brothers & Sisters: Complete Fourth Season

is available for purchase on Amazon.com and DVD retailers nationally.
Ratings are based on a 5-star scale.
Overall: 3.5
Review by Broad “A” – Ava
Thank you to Walt Disney Studios Home Entertainment for providing us with a copy for this DVD review. We were in no way compensated and all opinions are strictly our own.