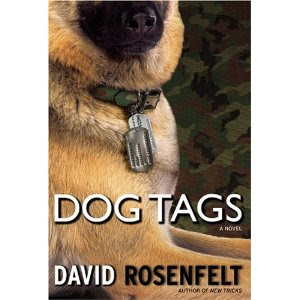 For some reason, I love David Rosenfelt’s dog infused mysteries. He may be a crime writer sleeper to some, but to me he’s right up there with the Numero Unos – the big boys. Like Nicholas Sparks, Rosenfelt’s melodic and paced writing only creates more friction – and although his characters fight crime, they remain good people without the Sturm Und Drang angst of Robert Bourne et al. Let’s face it, sometimes Patterson, Ludlam and Crighton are DRAINING. Rosenfelt clicks quietly, silencer on. Nice writing, great plot and his main character, Andy Carpenter, a lawyer, doesn’t stress over whether his clients can pay or not as long as they like dogs. He makes me feel good about crime. And he recognizes that dogs as better than people. What’s not to like?

Rosenfelt’s latest, DOG TAGS, revolves around Billy Zimmerman, a one-legged ex-cop turned thief and his army trained dog, German Shepherd Milo. Billy lost his leg to a suicide bomber while on duty in Iraq. He came back, with his partner, Milo, and on one of his scams becomes involved in a murder – which he obviously did not perform. Milo’s in jail too – Milo is trained to retrieve weapons from the hands of enemy soldiers. Erskine, a former Iraq comrade of Billy’s, is the murdered, and Milo grabs an envelope out of Erskine’s hand before he drops to the ground after being shot by ?? Billy, on the scene because he was suspicious Erskine was on to something worthy of being stolen, runs to take Erskine’s pulse. He and Milo are arrested. For Murder One.

No one knows where Milo dropped the envelope – or what was in it – so now Milo’s in a cage with a 24 hour FBI guard.

‘Til Andy steps in; first as Milo’s lawyer, then as Billy’s lawyer. Now Andy’s only doing this as a favor to his friend and almost ex-law-firm partner Pete Stanton, a cop. Pete is off to Bangladesh with his wife to perform good deeds (I told you these people are CARING!). Besides Milo, Andy utilizes ex-cop girlfriend Laurie, Marcus, a behemoth body builder giant type, and Willie, ex-con and friend to bust the case. As they all enter the labyrinth, the Minotaur yawns. His name is M. He’s a bad, bad, bad guy. His cohorts are a man called Greer, Chaplin, an investment type, Landon, and a certain Colonel in the Pentagon. Greer and Colonel were in Iraq at the suicide bombing. HMMMMM. Erskine was playing both sides, swishing the FBI and blackmailing M. When the riddle path leads to an upcoming world disaster in Massachusetts, Andy uses his FBI friend Cindy to get to Benson. Benson is the FBI agent in charge of trailing M, responsible for Billy’s incarceration, and Benson wants Andy to play Simon Says. Billy goes free, M dies. Willie becomes a national hero. End of story. But don’t kid yourselves. It’s the intermittent twists and spits and Milo and Andy’s daring that save the day. Bang Bang.

Even without the dog, did I mention how much I love David Rosenfelt?

If you like M.C. Beaton, P.D. James, and a simplistic Dorothy Sayers, you’re on this review – and book – like a snake! Enjoy!

This title was supplied to us for this book review. We were in no way compensated for this post and all opinions are strictly our own.