You are here: Home / He Says / Toy Review: Shred Sled 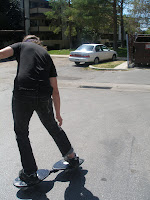