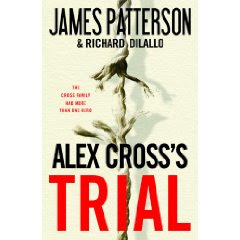 All of you who have read the Alex Cross series by James Patterson know Nana-Mama – Alex’s grandmother who watches over Alex and his children. This novel explores Nana-Mamas story of the Cross’s great-uncle, Abraham Cross and his friend, Ben Corbett.

Set in the early 1900’s, Ben Corbett, an attorney in Washington, D .C., takes on an unusual clientele – the Black folks who have nowhere else to turn for legal help. Ben comes from Eudora, Mississippi, and his father is Judge Everett Corbett, famous in the state of Mississippi for his conservative judiciousness. He and Ben have been at odds all of Ben’s life.

Suddenly, a summons comes to Ben from an extraordinary source – President Teddy Roosevelt. Ben has served under Roosevelt at San Juan Hill as Captain Corbett to Teddy’s Colonel Roosevelt. Now President Roosevelt has a proposal for Ben. He wants the young attorney to return to Ben’s home, Eudora, to investigate the KKK and the lynchings of Black people that have proliferated in the town. Ben appears astounded, but has witnessed a lynching when he was twelve and helpless to stop it.

He cannot refuse his President. However, at home, his wife Emily and twin daughters Amalia and Alice do not want him to go. Emily even goes so far as to state that she will not be waiting for him when – and if – he comes back.

Ben goes anyway, clutching the small piece of paper Roosevelt has handed him with his contact’s name on it. Abraham Cross. Eudora Quarters.

As Ben seeks justice the story plunges into the dark side of Eudora’s seemingly sociable little town. His father, Judge Corbett, wants nothing to do with his son. Ben’s supposed cover is that he is in town to interview judges for federal court. In just days, Ben is swept up in his chance meeting with his high school sweetheart, Elizabeth Nottingham, now married to State Senator Richard Nottingham.

He discovers that nothing is as it seems. His oldest and best friend Jacob is a Clansman. Ben walks into the Black Quarters and finds the home of Abraham Cross and his beautiful daughter Moody. Abraham shows him the lynching trees, even one body left hanging, mangled and disfigured, the work of the town’s upstanding citizens – members of the Clan and a group called the White Raiders.

As Ben and Abraham set out to find the truth, Ben himself is lynched and beaten, barely surviving. Aunt Henry, Abraham’s sister, nurses him back to health at Abraham’s small shanty with Moody assisting her.

As the town stirs up against Ben, the group called the White Raiders attacks Abraham’s house, trying to kill the entire household, including Ben. Luckily, the most successful businessman in town, L.R. Stringer is on Ben’s side, and present as the Raiders are captured and the sheriff is forced to arrest them.
I will leave you to read on about the trial, Roosevelt’s reaction and Ben’s fight in court with the presiding judge – Ben’s father. A little bit of Atticus from “To Kill a Mockingbird” and a lot of James Patterson and Richard Dilallo heading in a new direction, this novel bears fruit. A very good read and a great side view of the Alex Cross novels. Mr. Patterson is back!

Rating is based on a 5-star scale

Alex Cross’s Trial can be purchased at Amazon.com

Thank you to Hachette for providing a copy of this book for review as well as the giveaway copies. The Broads and our readers really appreciate it.

Remember that you can enter DAILY!

* This giveaway is open to US residents, 18 and over and ends on August 28, 2009 11:59 EST.
* The winner will be randomly chosen and contacted via email.
* The winner has 48 hours to respond to my email or an alternate winner will be chosen.
* Please make sure you check your junk mail folder
* Good Luck

Our Summer Fun Guide is here